What will you see from a hot-air balloon ride above Kissimmee, Florida?

There are not many things I will gladly do at 6 a.m. But getting up before the sun rises to go hot-air ballooning in Kissimmee is worth the groggy eyes in my book.

Why the early wake-up call? Pilots tend to fly at the crack of dawn because the winds are calmer around that time and flow parallel to the earth, which allows for a smoother ride. I, for one, am all for that. 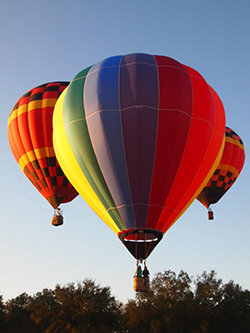 After meeting Bob Wilamoski, the owner of Bob's Balloon Charters, and our group at a McDonald's parking lot, we drove to the launch location-a large grassy field on the outskirts of Kissimmee, Florida. As Bob filled up the balloon with air, the sun came up and provided a golden glow that started to wake things up.

I've been on two balloon rides before, so I knew exactly what to expect-a calm, peaceful ride at maybe 500 feet or so.

One of the newbies asked me: "So, is it scary?"

I reassured her that it is no scarier than looking down from a balcony.

After that, she was all smiles as the six of us climbed into the basket one by one. For one rider from Boston, this was on his bucket list. For another, it was her birthday. Everyone was clearly giddy. With a whoosh of the burners to propel the balloon upward, away we went.

We flew high above lakes, untouched swamplands, 100-year-old oak trees and fancy vacation homes. The bird's-eye view also gave us a new perspective of the area's iconic theme parks. We saw Mount Everest at Disney's Animal Kingdom, Spaceship Earth at Epcot and Walt Disney World's Swan and Dolphin hotel. Plus, we spotted the Bok Tower in the distance and even the skyscrapers in downtown Orlando and Tampa. 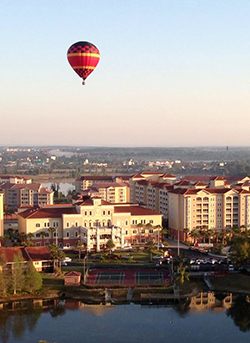 Throughout the flight, I kept my eyes peeled for wildlife. Wilamoski says he sees animals often on hot-air balloon excursions. We saw mostly birds on our flight. I will have to take his word for the deer, hog, turkey, coyote, fox, panther, bear and gator sitings he's had. Better yet, he says he once landed in an area filled with colorful macaws flying around. In other words, you never know what exotic wildlife you're going to see in Central Florida.

Speaking of surprises, we witnessed a man on a balloon flight nearby propose to his girlfriend at 500 feet. Talk about romantic. And, turns out, it's extremely common. So, if you are looking to pop the question in an unusual way or simply to celebrate a milestone, this might be the way to go (as long as the person being surprised is not afraid of heights).

At the end of our journey, we had a brunch of delightful flatbread pizzas, chocolate croissants and fresh fruit salad. To top it off, a champagne toast (a 200-year-old tradition for ballooners).

Meanwhile, Wilamoski told us how he got started in 1984 when he built his own balloon. Since then, he's taken nearly 3,000 flights, hosting everyday tourists to retired astronaut Story Musgrave.

One thing is certain: With many more sunshiny days a year than not, Kissimmee is a hot-air ballooner's paradise. And you will definitely go home with bragging rights and the photos to prove it.

Bob's Balloon Charters is one of many adventure outfitters that take visitors up into the sky and out on the water. Add thrilling outdoor adventures to your Kissimmee vacation. Order or view the Kissimmee Area Guide for even more.