GayDays® is a yearly vacation celebration for the LGBTQ+ community in Central Florida that's been happening at the local theme parks since 1991. It's not an official Walt Disney World event, but every year thousands attend the parks to celebrate GayDays®. We put together this guide to the weekend theme park festivities so you can join in the fun and find the ‘sea of red' at all times!

The GayDays® vacation celebration kicks off the month of June, which is LGBTQ+ Pride Month in the United States. The weekend of festivities is one of the biggest pride events in the world. It started in 1991, when 3,000 people from the local LGBTQ+ community attended the theme parks for one day wearing red t-shirts to make their presence more visible.

GayDays® celebrates LGBTQ+ people and their friends and families enjoying the magic of the theme parks in a supportive, inclusive atmosphere.

Now in its 27th year, more than 150,000 people will attend the weekend event, which includes theme park meetups as well as parties and expo events outside the parks.

Follow along and share on social media using #RedShirtDays, or grab your own red shirt and tag us in your photos!

While many families will be enjoying the celebrations by visiting the parks on their own schedule, there are official theme parks designated for each day. We recommend checking out the Facebook Event Page for each park, as there are meetups scheduled throughout the day for youth, adults, families, couples, and singles alike!

Whether you're keen to join the red shirts or are looking to avoid the crowds, this schedule will help plan your weekend.

Home to over 1,700 animals from 250 species, Animal Kingdom is the largest zoological theme park in the world. The new Rivers of Light night show is stunning to behold, and movie fans will love diving into Pandora: The World of Avatar.

Join the Animal Kingdom Facebook Event for park meetups throughout the day.

Join the SeaWorld Orlando Facebook Event for park meetups throughout the day.

Get a behind-the-scenes look at all your favorite movie magic at Disney's Hollywood Studios. Learn about Hollywood history before testing your limits on the Tower of Terror, or head into space at Star Wars Launch Bay, where you can meet BB-8, Kylo Ren, and the crew.

Join the Hollywood Studios Facebook Event for park meetups throughout the day.

Universal's Islands of Adventure 9 AM - 8 PM

At Universal's Islands of Adventure, there's an epic journey waiting for you around every corner. Whether it's soaring above Hogwarts in The Wizarding World of Harry Potter - Hogsmeade, or undergoing ‘Hulk-a-fication' onthe redesigned Hulk roller coaster, inspired by military aircraft. Maybe you just want to grab an authentic Butterbeer to wash down your pizza. Whatever you choose, be prepared for a day filled with your favorite heroes and villains alike.

Join the Islands of Adventure Facebook Event for park meetups throughout the day.

The park where fairytales and dreams come to life. Saturday's Magic Kingdom meetup is traditionally the largest event of the GayDays® weekend. Visit the six enchanting lands that make up the kingdom: Main Street USA, Adventureland, Frontierland, Liberty Square, Fantasyland, and Tomorrowland. Experience the grandest of finales to your day with the new Happily Ever After fireworks show.

Join the Magic Kingdom Facebook Event for park meetups throughout the day. 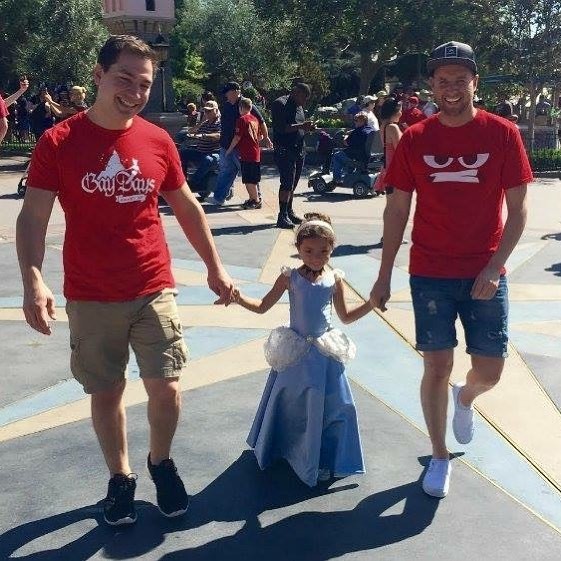 Families go all-in! If red's not your color, try a character costume.

Lights, camera, action! Universal Studios Florida is your ticket to stardom. Look for your wizardly school supplies at The Wizarding World of Harry Potter - Diagon Alley, join Optimus Prime on TRANSFORMERS: The Ride-3D, be transformed into a Minion on the 3D ride Despicable Me Minion Mayhem, and careen and crash through Krustyland on The Simpsons Ride.

Join the Universal Studios Facebook Event for park meetups throughout the day.

How about 11 countries in one day? Creativity and imagination unite in the World Showcase around Epcot's lagoon. Visit Mexico, Norway (say ‘Hi' to Elsa for us!), China, Germany, Italy, United States, Japan, Morocco, France, the United Kingdom, and Canada. Enjoy a bite to eat or a drink from each country before blasting into space at Future World, or taking a high-flying Soarin' adventure.

Join the Epcot Facebook Event for park meetups throughout the day.

Join the I-Drive 360 Facebook Event for park meetups throughout the day.

Discovery Cove is an all-inclusive day resort experience that's one of a kind. Swim with dolphins, snorkel among thousands of colorful fish and rays, hand-feed tropical birds, and unwind on pristine beaches. It's the perfect balance between adventure and relaxation.

Join the Discovery Cove Facebook Event for park meetups throughout the day.

A 150-acre theme park geared towards families with kids. There are more than 50 rides at LEGOLAND Florida, including the recently opened LEGO NINJAGO attraction, where you can train like a ninja. Everything is awesome when you're building an amazing day with your friends.

Join the LEGOLAND Florida Facebook Event for park meetups throughout the day.

A full calendar of family and adults-only events can be found here. And be sure to check out our calendar of festivals and events for everything else going on in Kissimmee this weekend, and last minute vacation deals. We also have a handy list of hotels near the Disney theme parks if you're looking for a place to stay.

Whether you're participating in #RedShirtDays or enjoying a vacation any time of year, share your vacation memories with us using #MyKissimmee on Instagram.

Getting Whelmed with Tyler Measom

January 21, 2020 by
We sat down with award-winning director Tyler Measom to discuss his new film, Finding Whelmed, and what this new phenomenon is all about.
Continue Reading

Where to Watch the Big Game in Kissimmee

January 16, 2020 by Experience Kissimmee
We share the top places to catch the Big Game in Kissimmee, FL.
Continue Reading

Sticking With Your New Year's Resolution While on Vacation in Kissimmee

January 08, 2020 by Experience Kissimmee
Want to make sure you stick to your New Year's resolution while on vacation? We can help!
Continue Reading

January 02, 2020 by Experience Kissimmee
A new year means new rides, attractions, and restaurants! Here's a sneak peek at what's new and what’s next for your 2020 visit.
Continue Reading

The 2019 Kissimmee Round Up

December 26, 2019 by Experience Kissimmee
Vacationers took awesome photos this year in Kissimmee, and now we're sharing some of our favorites with you!
Continue Reading

December 19, 2019 by Experience Kissimmee
Want to be on every nice list this year? Then be sure to visit these five must-do activities while visiting this sunny version of a “wintery” wonderland.
Continue Reading
Receive Exclusive Offers from Kissimmee We promise not to overwhelm your inbox!