Your Guide to Batuu

Posted by: Experience Kissimmee on August 29, 2019

Star Wars: Galaxy’s Edge is finally here! This new, immersive land at Disney’s Hollywood Studios® – located just minutes from Kissimmee at Walt Disney World® Resort – is full of sights, smells, tastes and sounds unlike anything you’ve ever experienced before. We got a special sneak peek visit to the planet of Batuu, as the land is formally called, and we want to give you an easy everything-you-need-to-know guide to this out-of-this-world (literally) must-see location!

For starters, when you walk into the park, you’re not only surrounded by favorite Star Wars enchantments, but it feels as though you woke up on a completely different planet – in another galaxy! The planet of Batuu is the newest location in a story that began in 1977 with the first Star Wars film. Black Spire Outpost is a section of Batuu which is located along the galaxy’s Outer Rim in the uncharted region beyond all known star systems called the Wild Space. This area is an infamous port for smugglers, traders and adventurers who want to avoid any endangerments with the First Order. You’ll find that Black Spire Outpost is full of adventure including helping the Resistance, perhaps encountering the First Order, tasting unique foods and drinks or even joining a spy crew. You can become part of the action as you create your own story and interact with characters from across the galaxy. The only tricky part is choosing a side…may the Force be with you on that one! 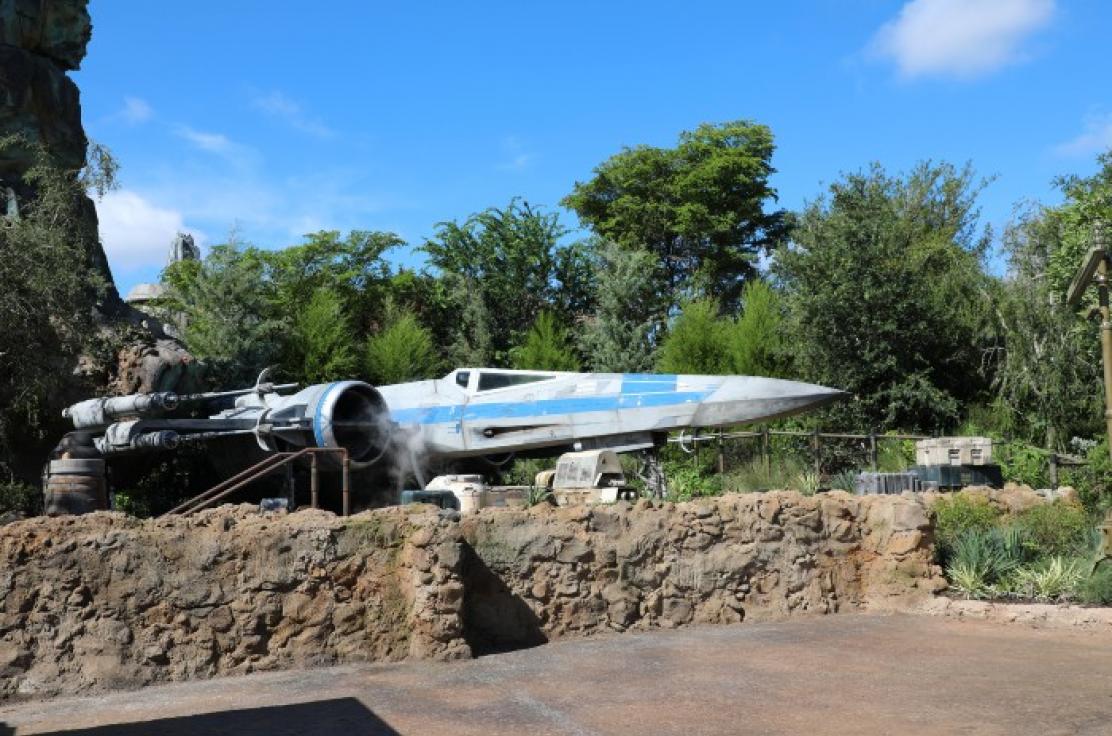 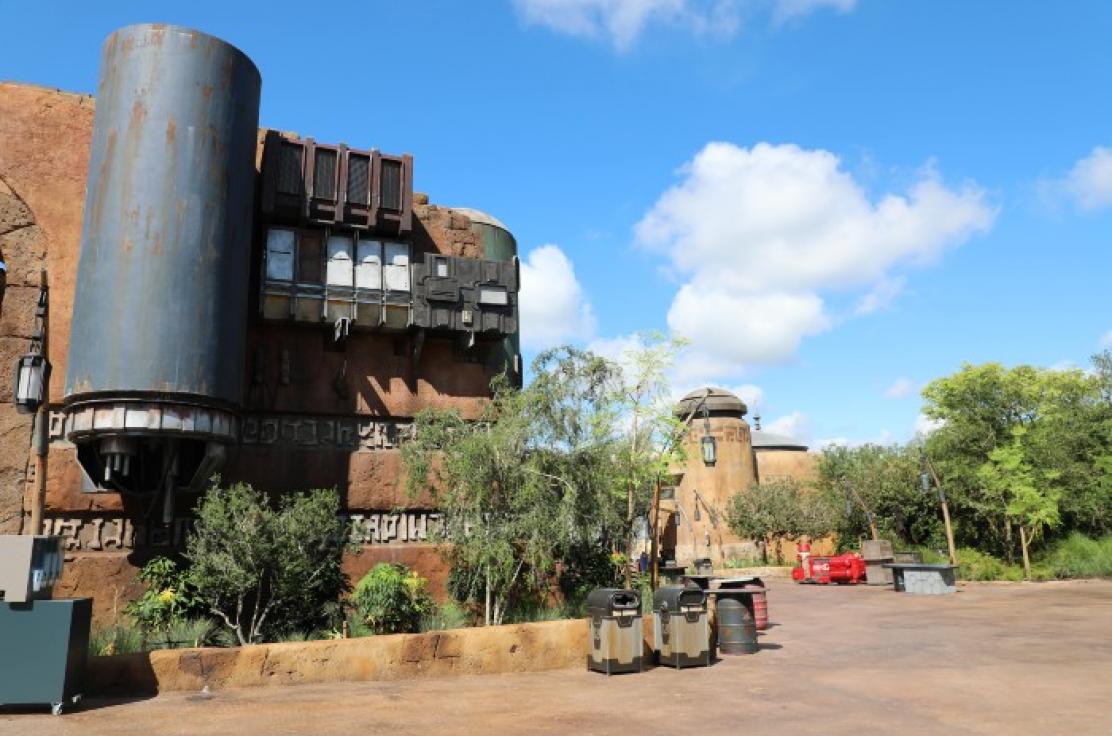 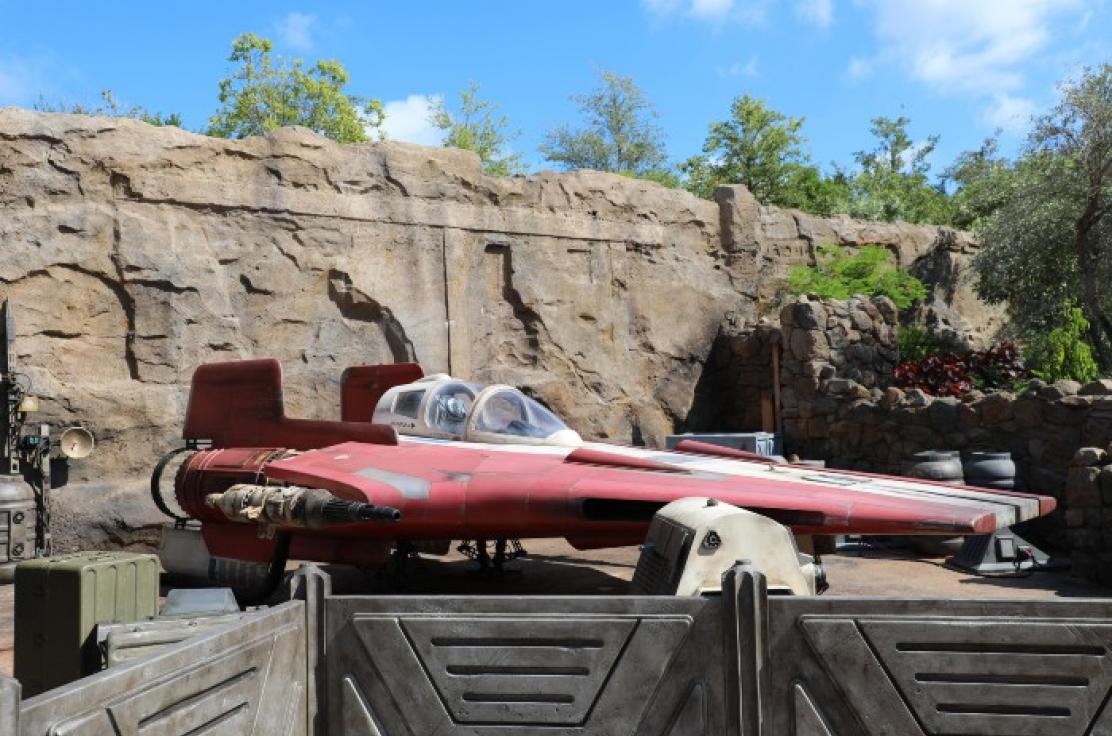 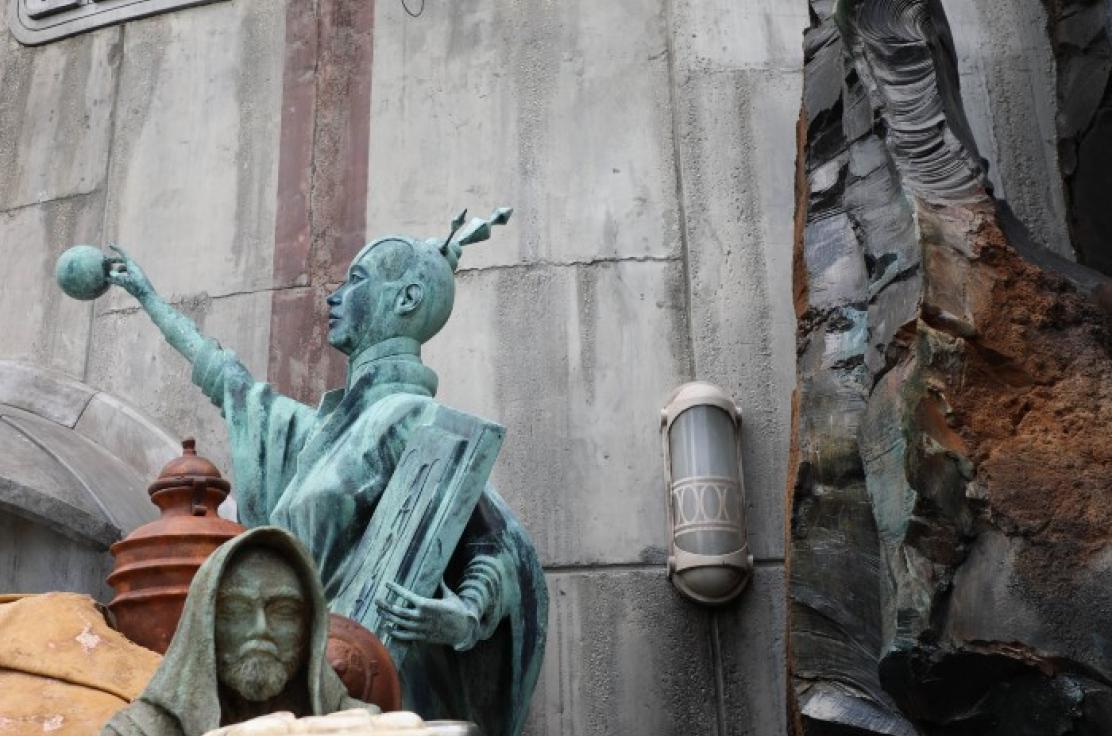 Once you’re transported to Batuu, you’ll encounter many familiar characters from the beloved Star Wars films. There’s no designated meet and greet areas, as you’ll see these friends (or foes) walking freely about the land. Interact with them, tell them where you’re from and always be prepared to reveal if you’re helping the Resistance or enforcing rules with the First Order. Also, be aware of patrolling Stormtroopers. They have a habit of asking what you’re using your datapad…I mean phone…for, so be careful!

You’ll have the chance to meet Rey, Kylo Ren and his Stormtroopers, Vi Madori, Chewbacca, citizens of Batuu, droids and Hondo Ohnaka (the Weequay pirate running a “legitimate business” called Ohnaka Transport Solutions) during your day of exploration. 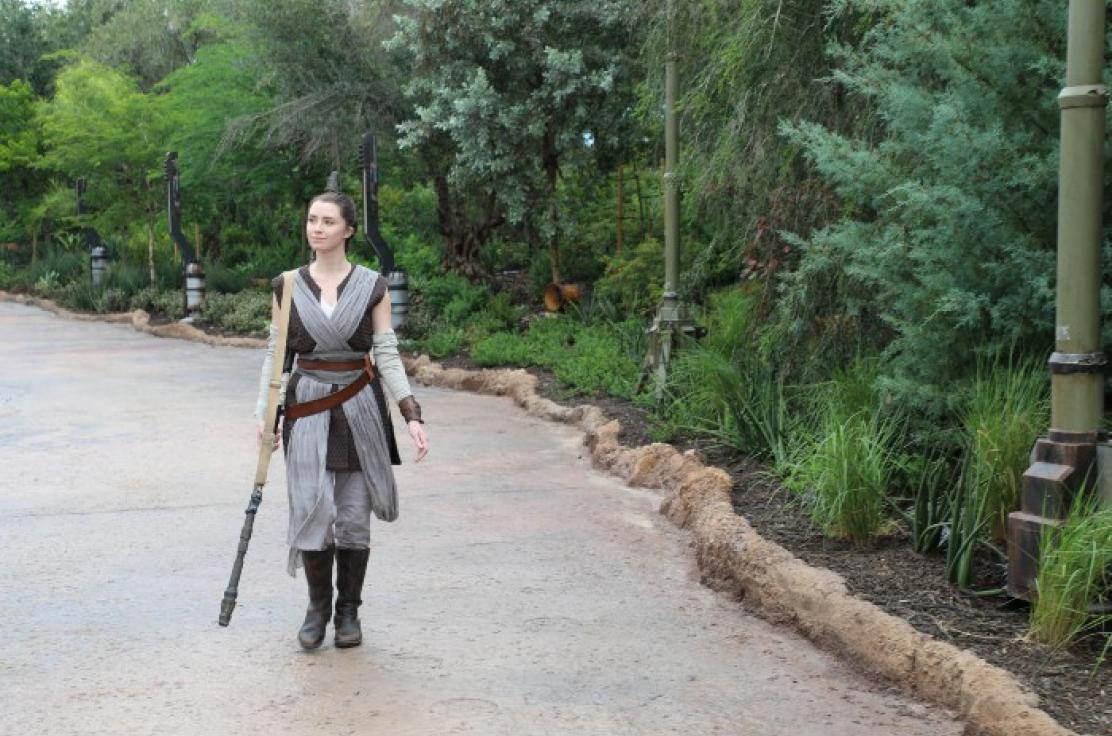 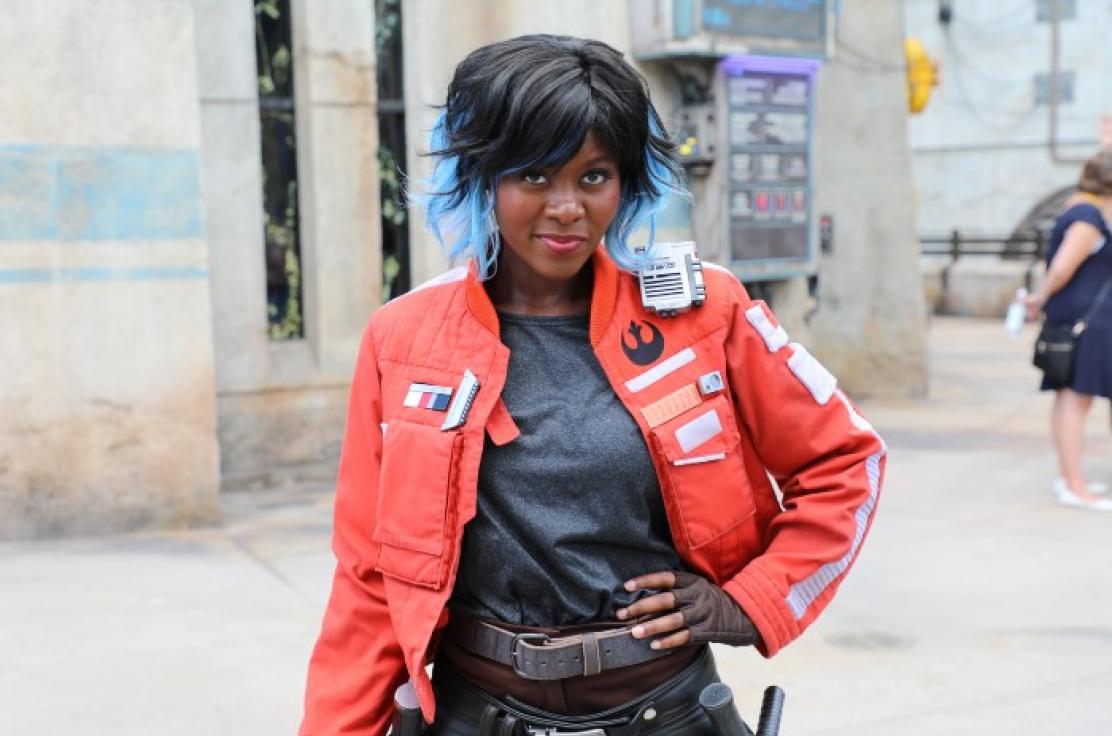 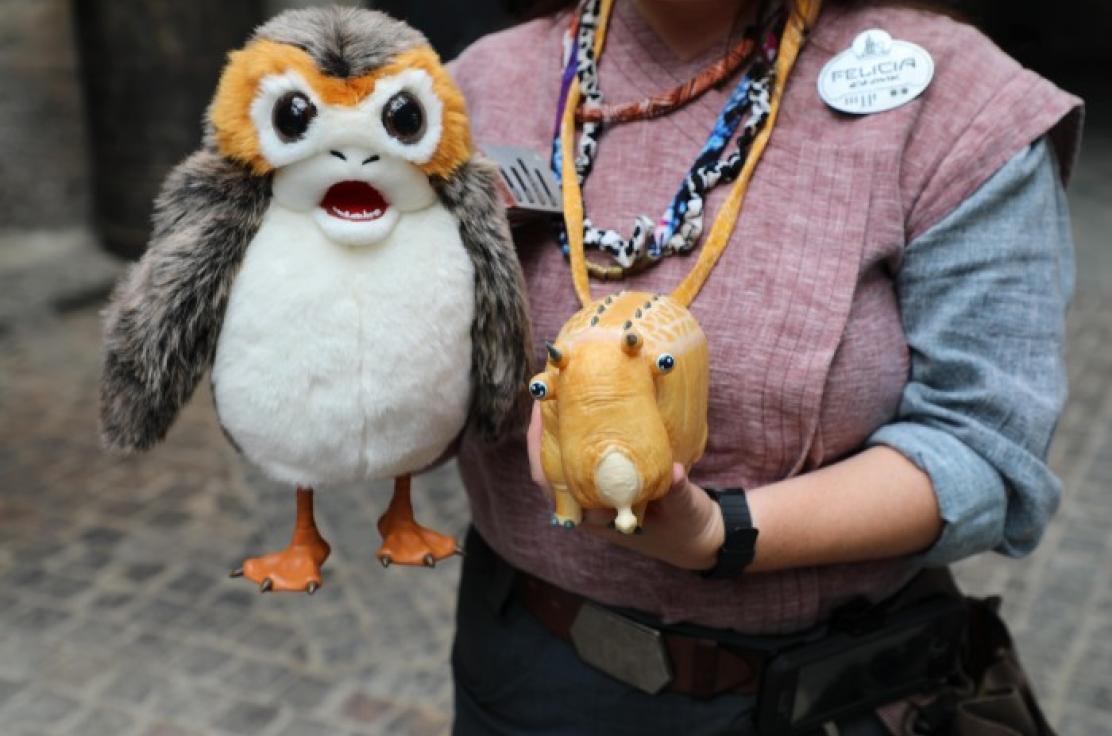 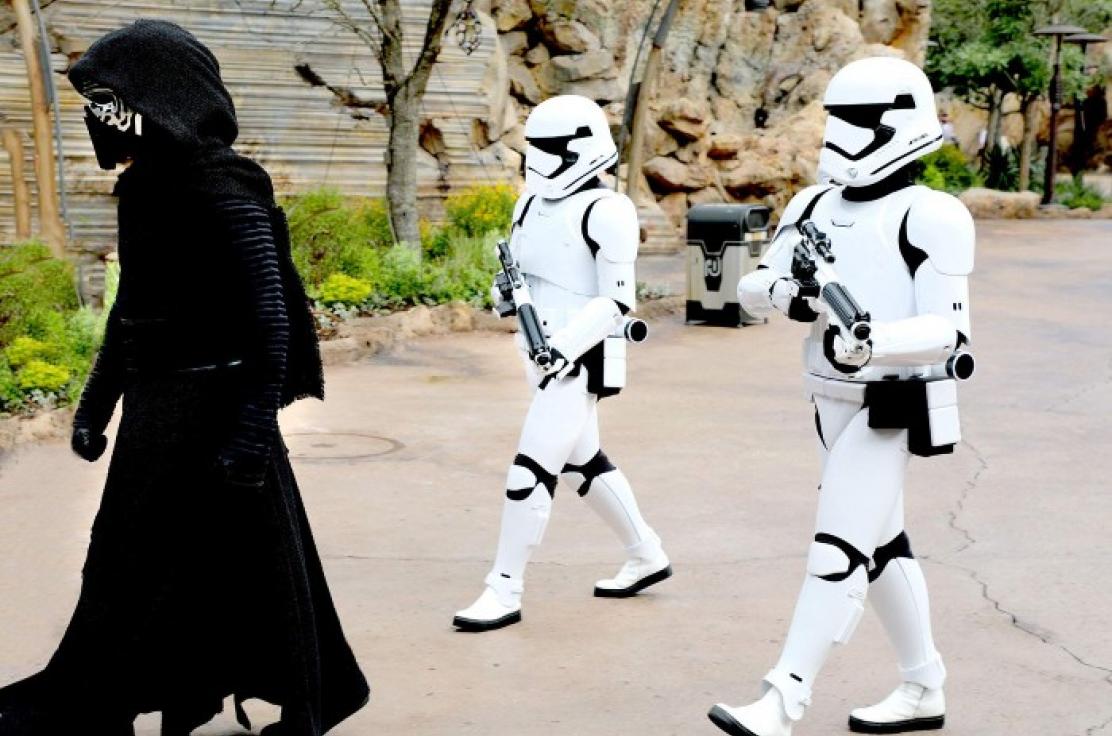 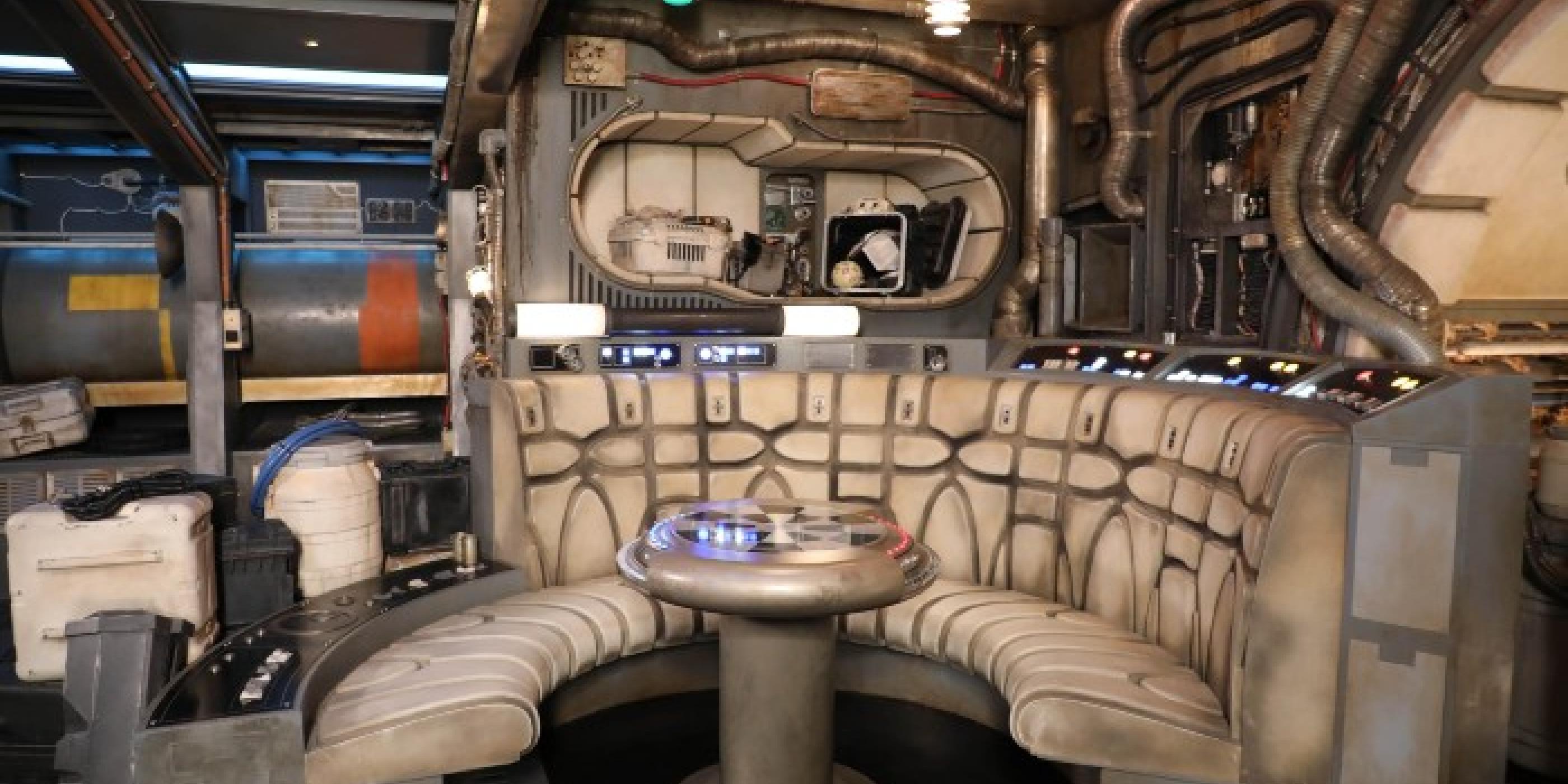 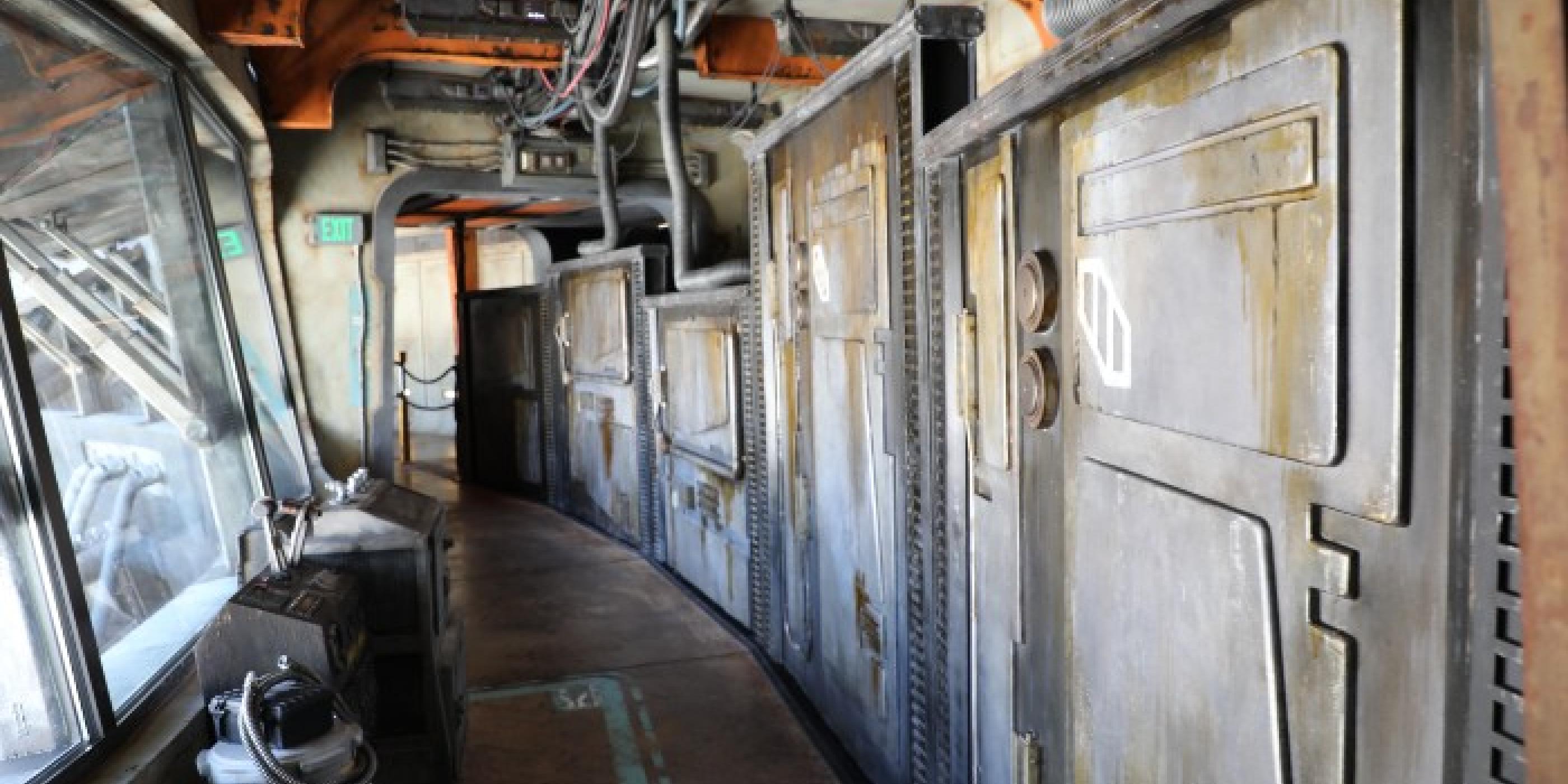 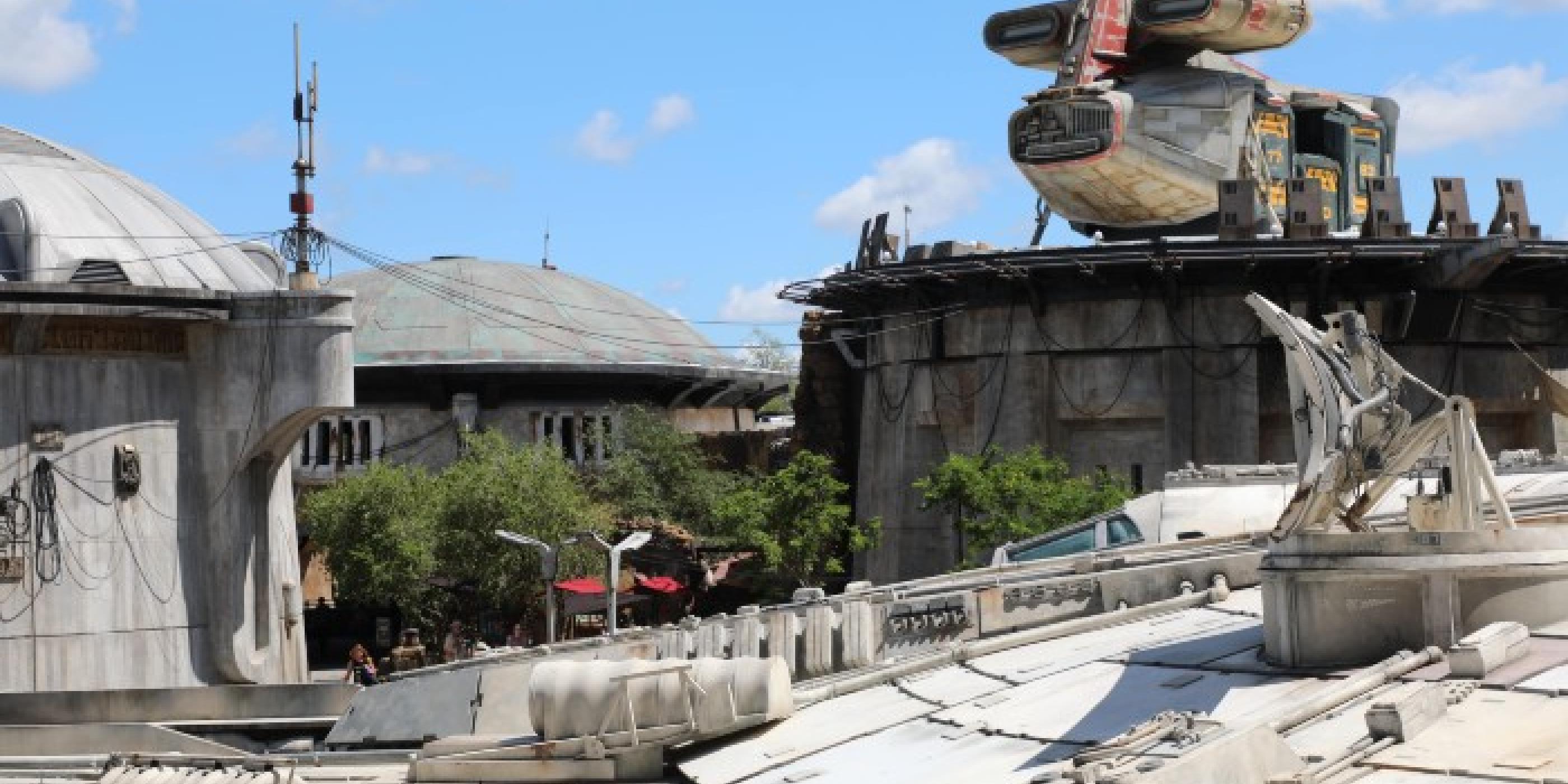 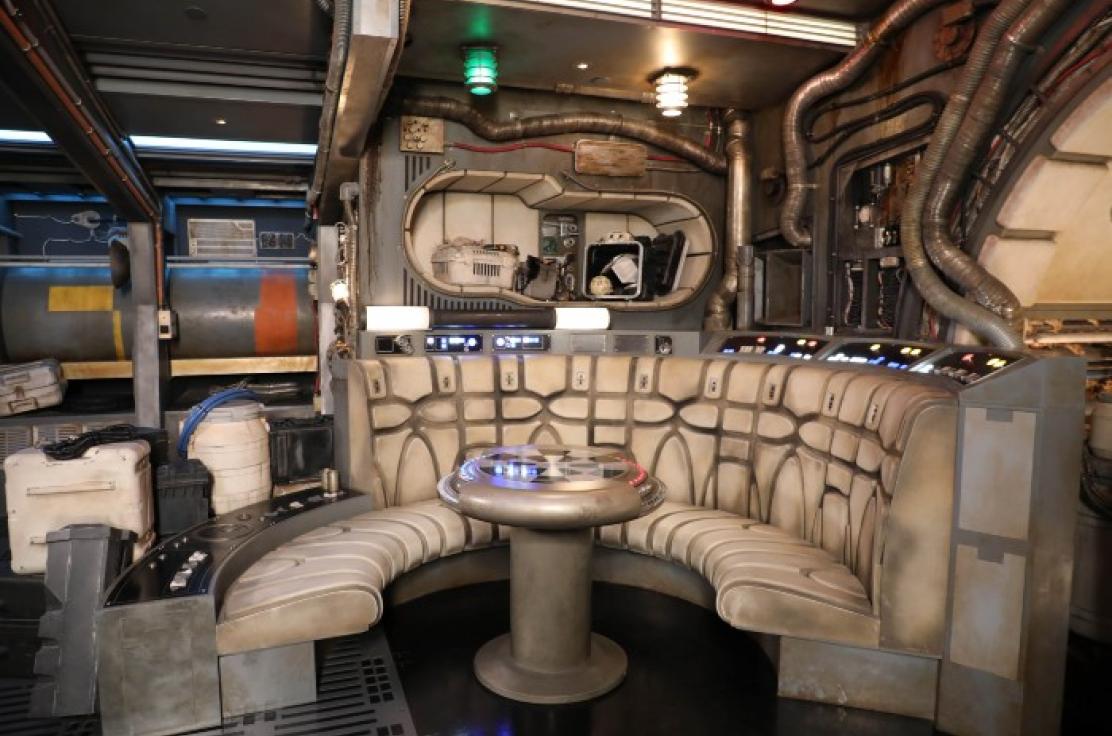 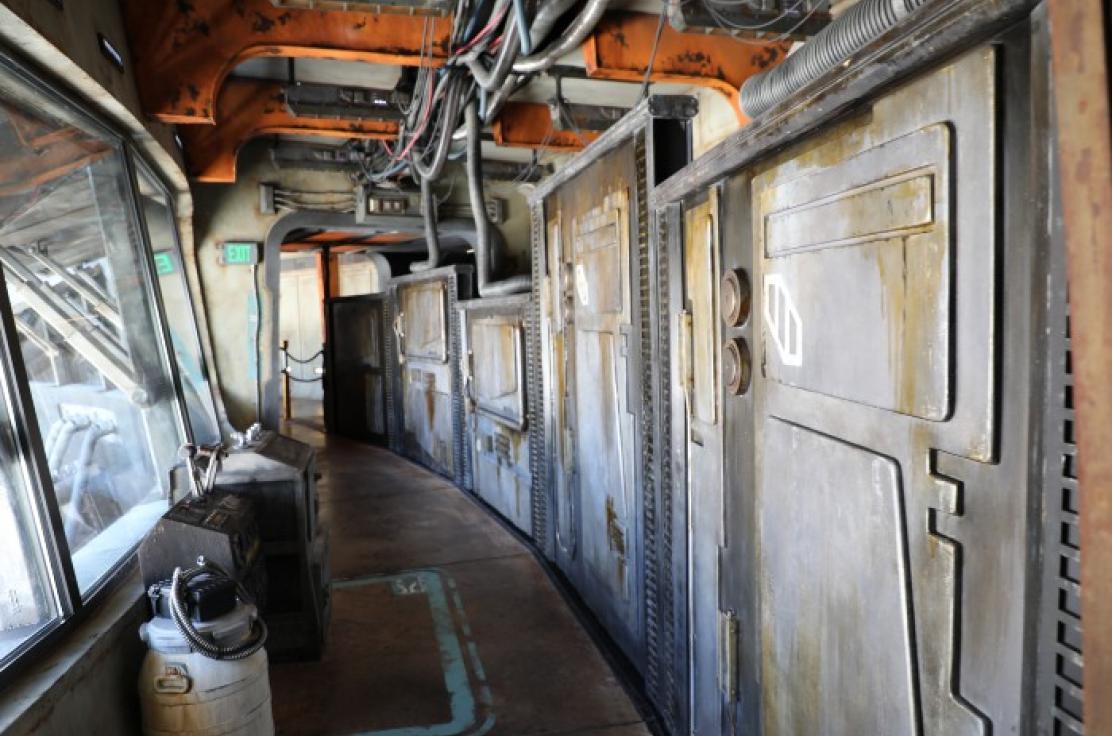 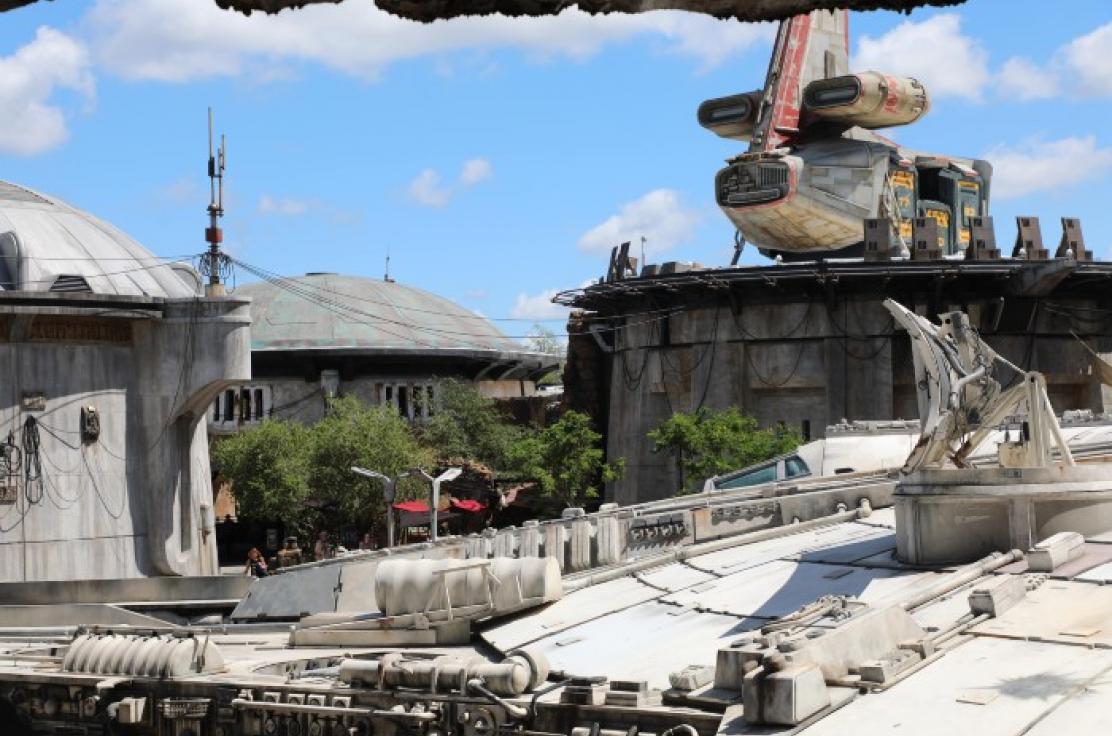 We couldn’t believe it, but in Batuu anyone can become an official pilot of the Millennium Falcon! On the new ride opening today – Millennium Falcon: Smugglers Run – you’ll be paired with an engineer and gunner to go on a mission to deliver smuggled goods. Upon entering the “fastest hunk of junk in the galaxy,” you’ll climb into the cockpit and take control of the Falcon. Hold on to your seat and remember to press the correct buttons that will launch the ship into the galaxy. With two of each – pilots, gunners, and engineers – on board, what could go wrong? 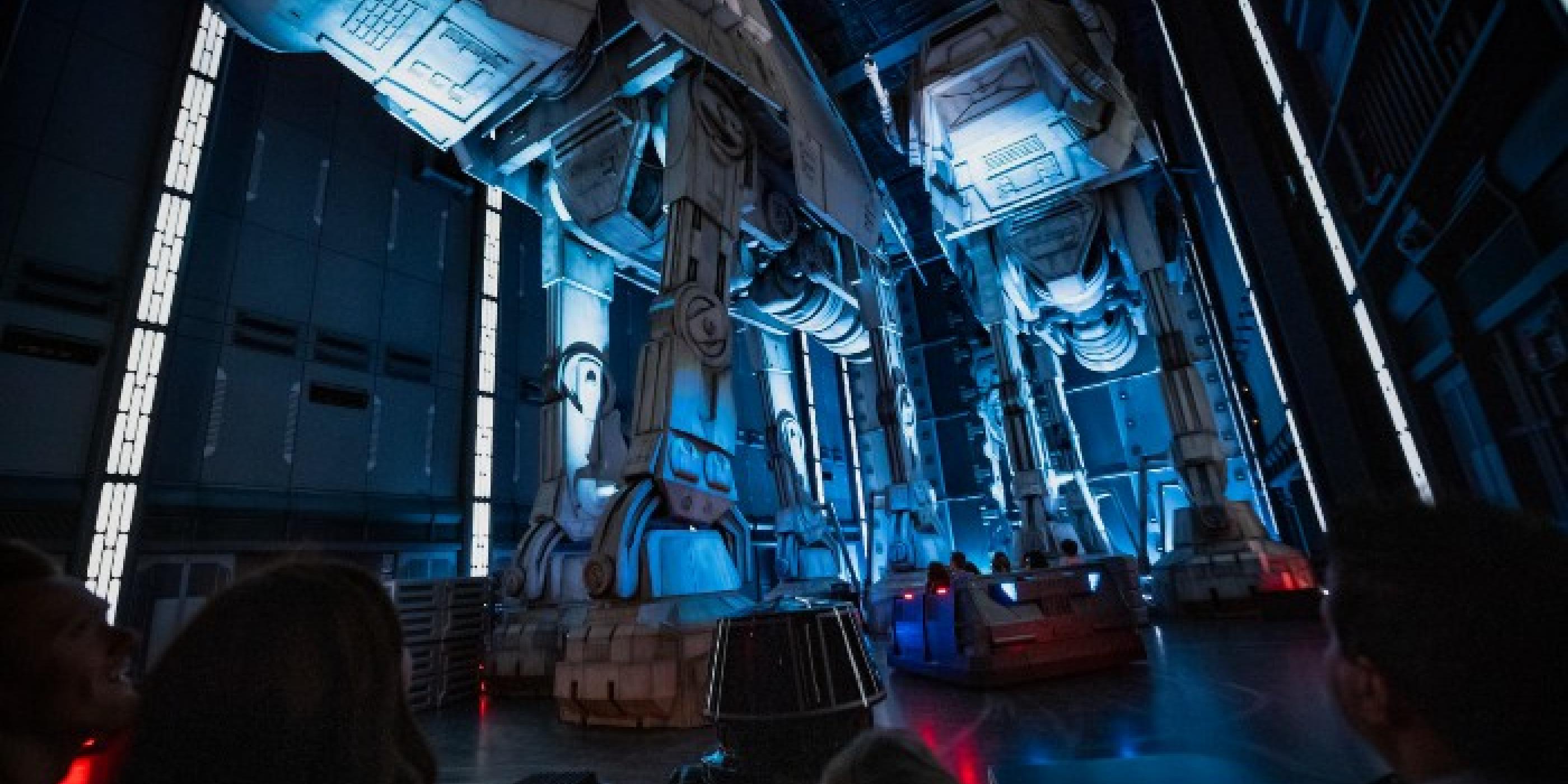 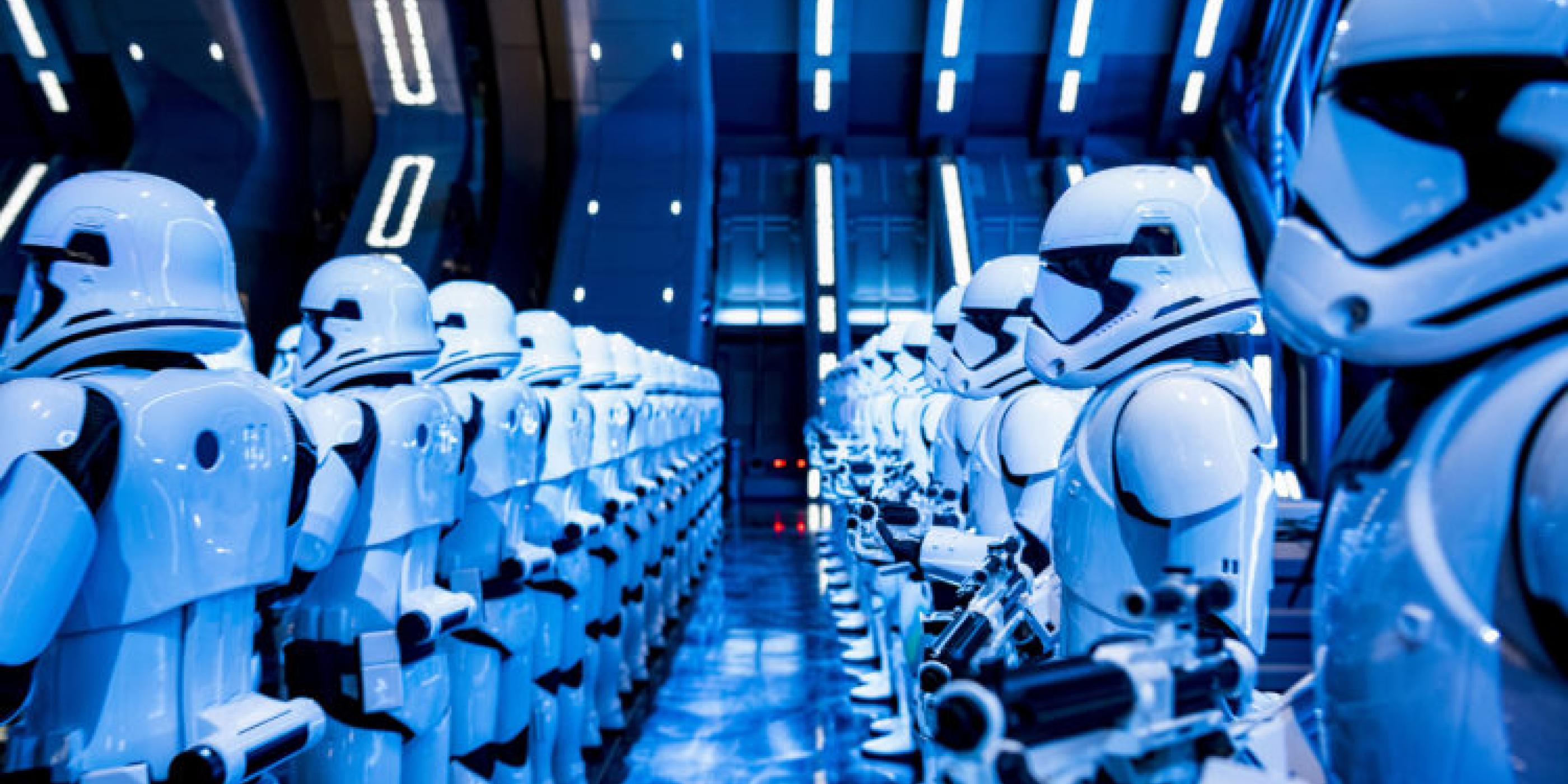 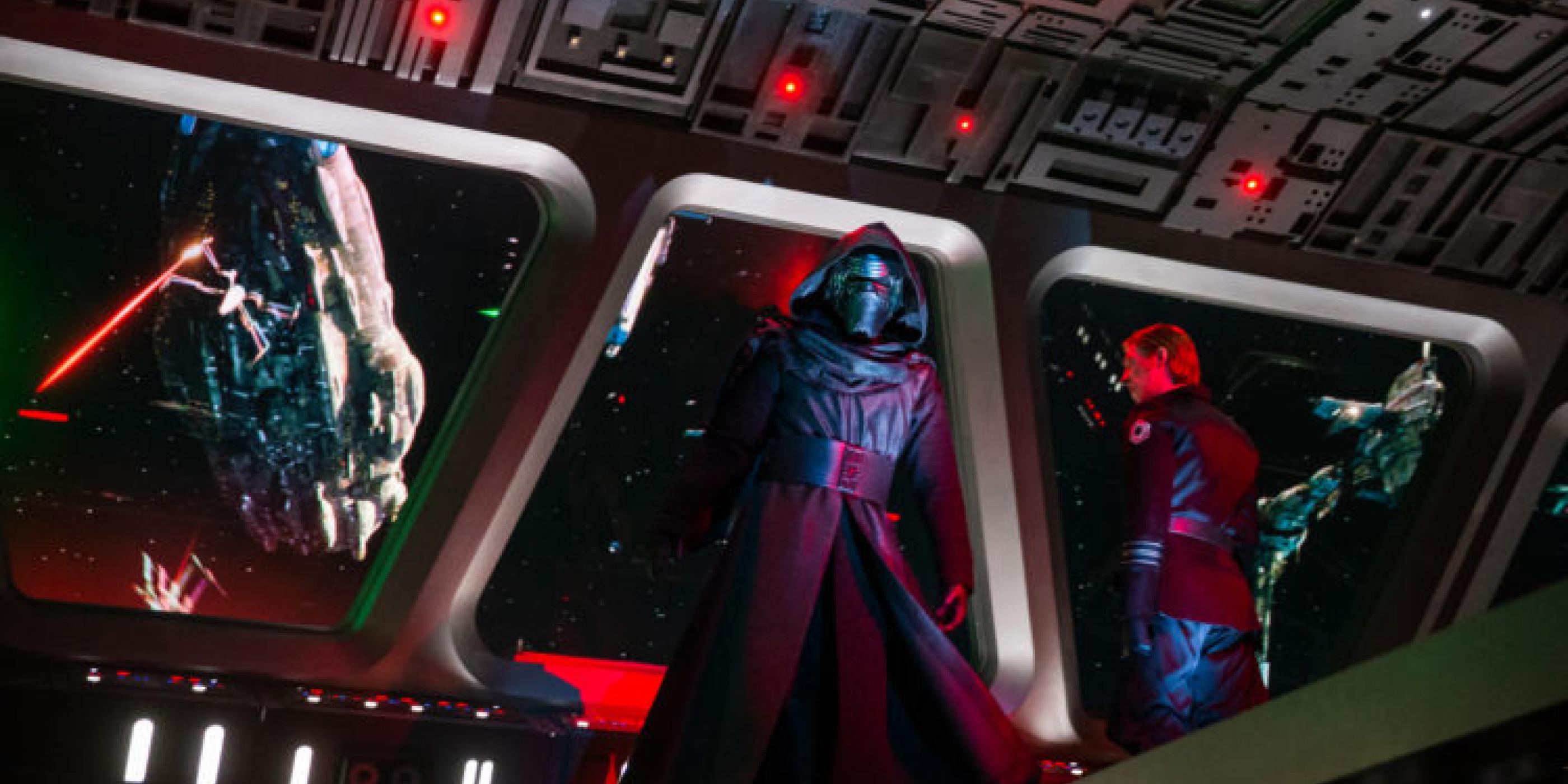 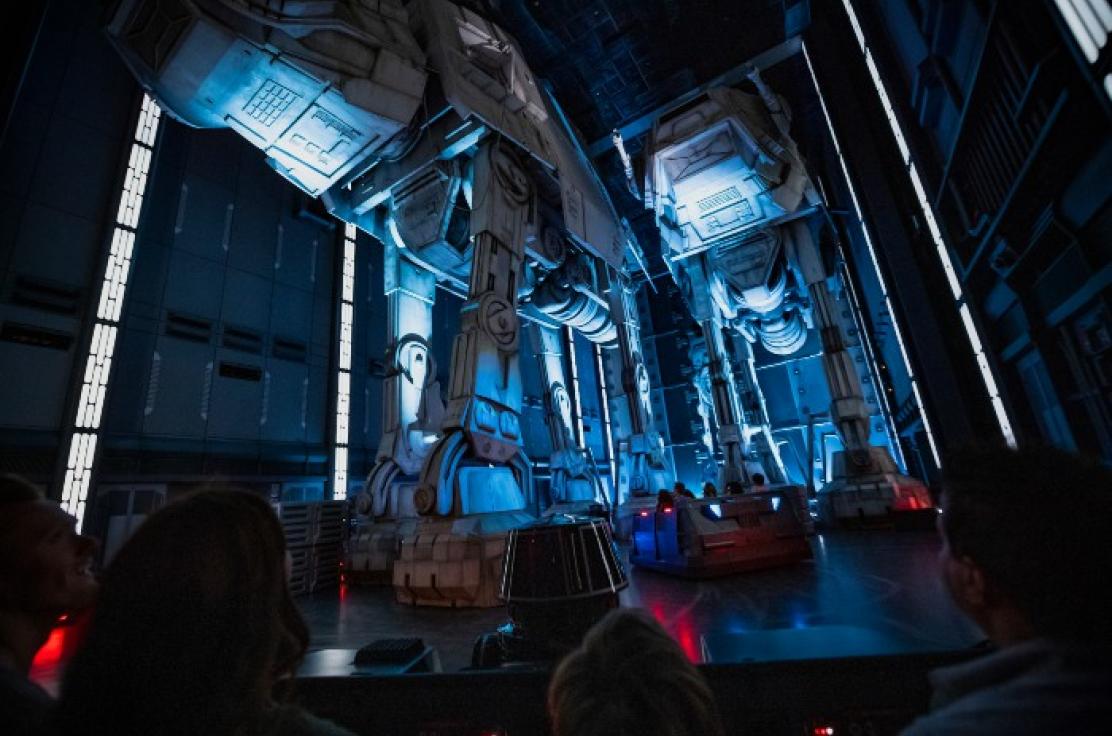 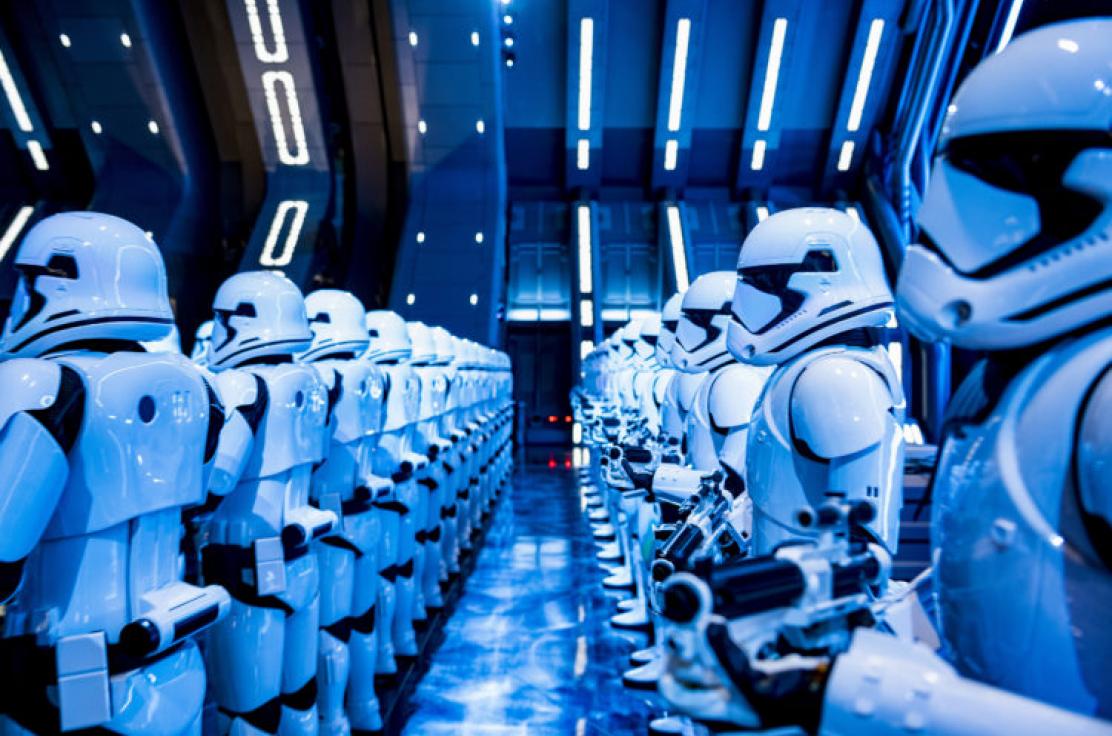 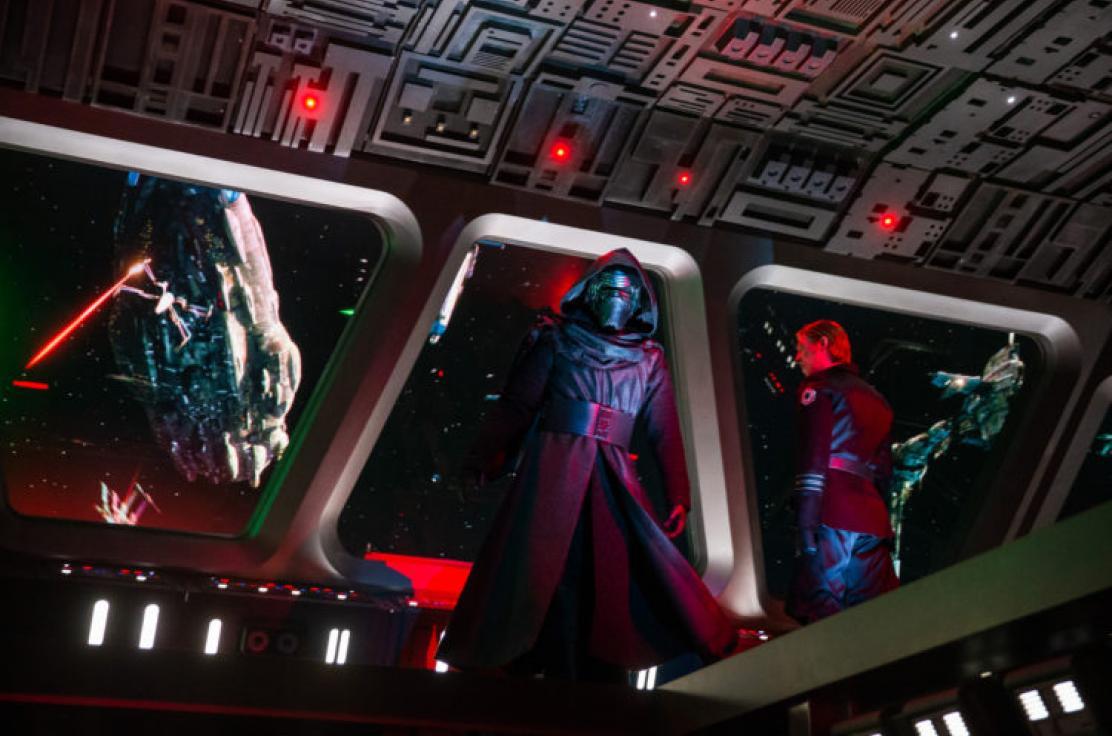 Visitors and citizens of Batuu finally have the opportunity to ride the epic Star Wars: Rise of the Resistance thrill attraction. Now that this highly anticipated ride is officially open, Star Wars: Galaxy’s Edge is officially ready and complete for guests to enjoy.

This trackless simulator ride takes Resistance sympathizers through a climactic battle between the First Order and the Resistance. Your mission is to keep the location of the Resistance base a secret – and most importantly, to stay alive.

At first, you’ll walk through the caves of Batuu where BB-8 and Rey greet you with your special mission. After that, you board a transport space shuttle where the First Order capture all the guests unexpectedly (what?!) and immediately officers begin barking orders at you. You’ll then be approached by a lineup of very realistic Storm Troopers armed at the ready abroad a Star Destroyer.

After being delegated to specific jail cells, the general and Kylo Ren try to force the location information from the sympathizers. However, within moments, members of the Resistance come to the rescue! You’ll be quickly whisked up by a moving R5 droid cruiser and this eight-person transport is where the fun begins. From the moment the door opens, the realistic animatronics, images, and sounds ignite. Everything from lightsabers and space battles to droids and escape routes come to life.

You won’t believe your eyes as everywhere you look, there are distinct details of this enormous Star Destroyer. Laser blasters from towering AT-AT walkers explode all around you and even cut into nearby ceilings and walls while the pod is lifted to the bridge of the Star Destroyer.

On this exhilarating attempt at escape, Kylo Ren appears and continues to pursue the cruiser. Will you escape? Or will the First Order capture the Resistance team? You’ll have to find out for yourself during your visit to Star Wars: Galaxy’s Edge.

What You'll Eat and Drink

There’s no need to fret about being parched or hungry. On Batuu, there are many spots to quench your thirst and grab a bite to eat.

When we smelled the grilled meat wafting through the air, we knew we’d made it to Ronto Roasters. The Ronto Wrap is a must-try as the former smelter droid turns a spit of meat beneath the huge podracer engine. Docking Bay 7 Food & Cargo is also loaded with delicious food and tasty drinks. While sitting in unused cargo containers, there’s nothing better than chowing down on galactic dishes with ingredients from across the galaxy. 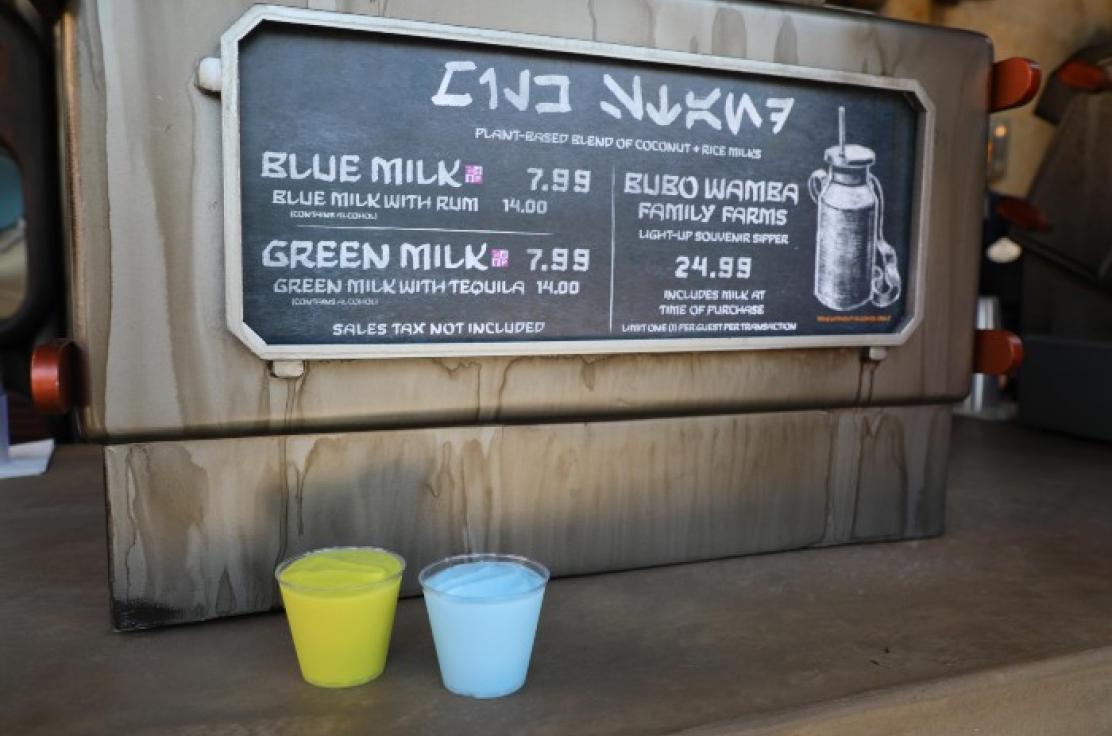 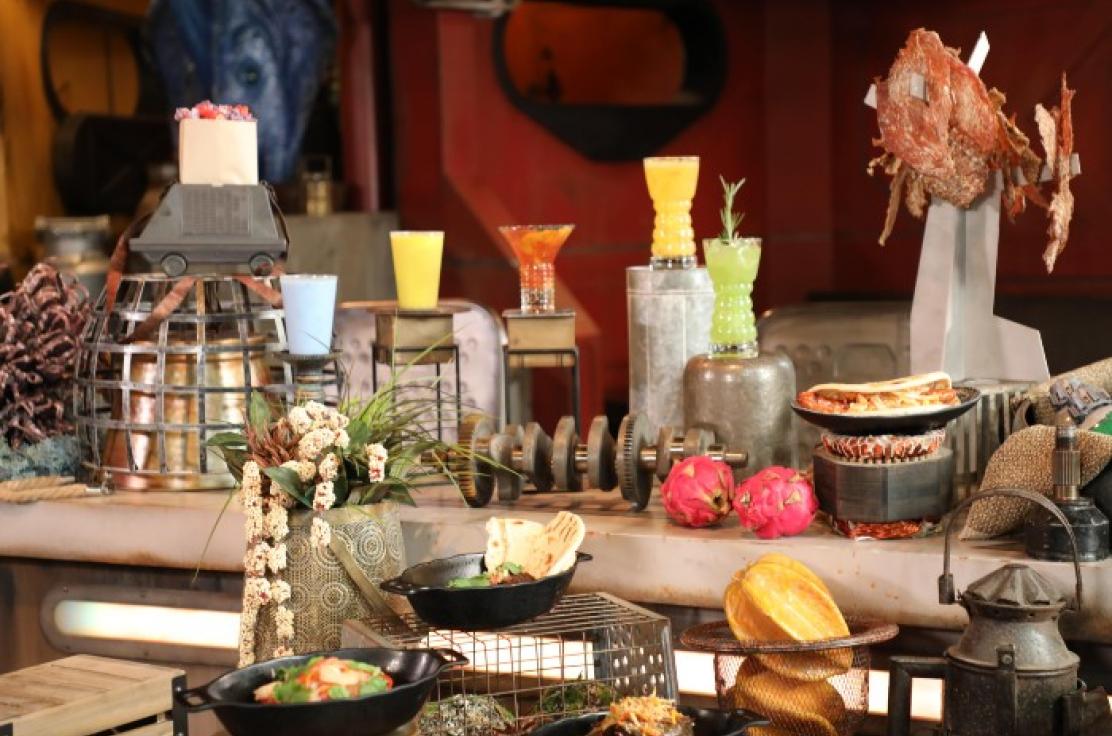 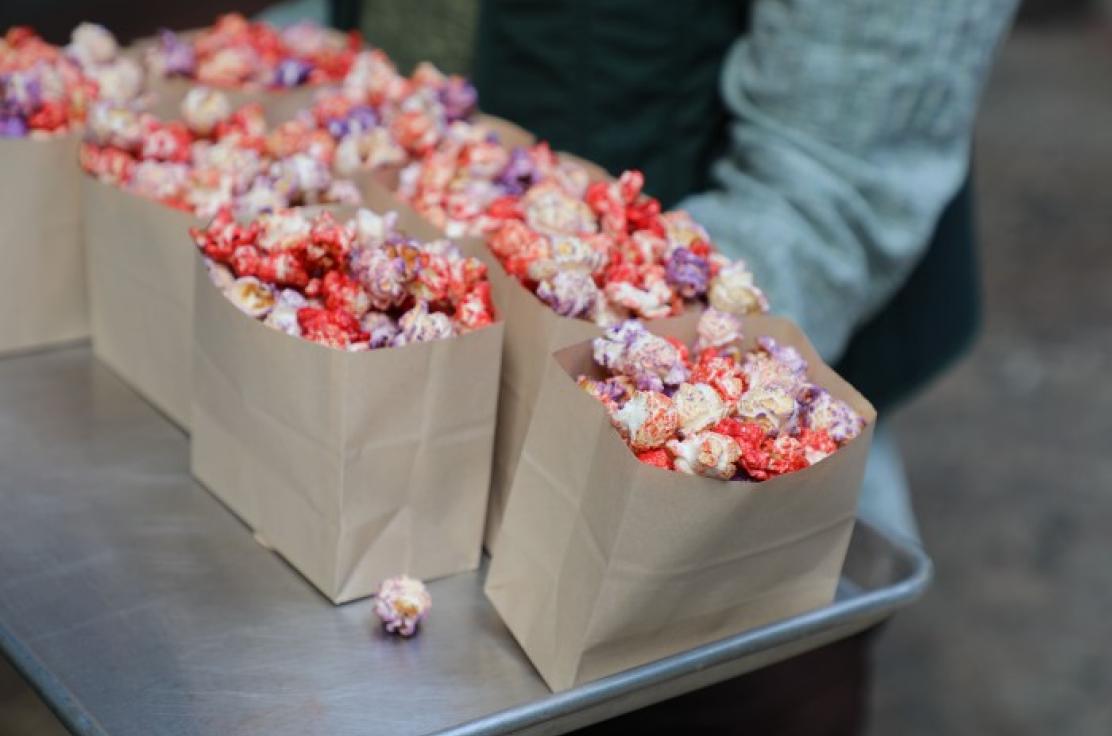 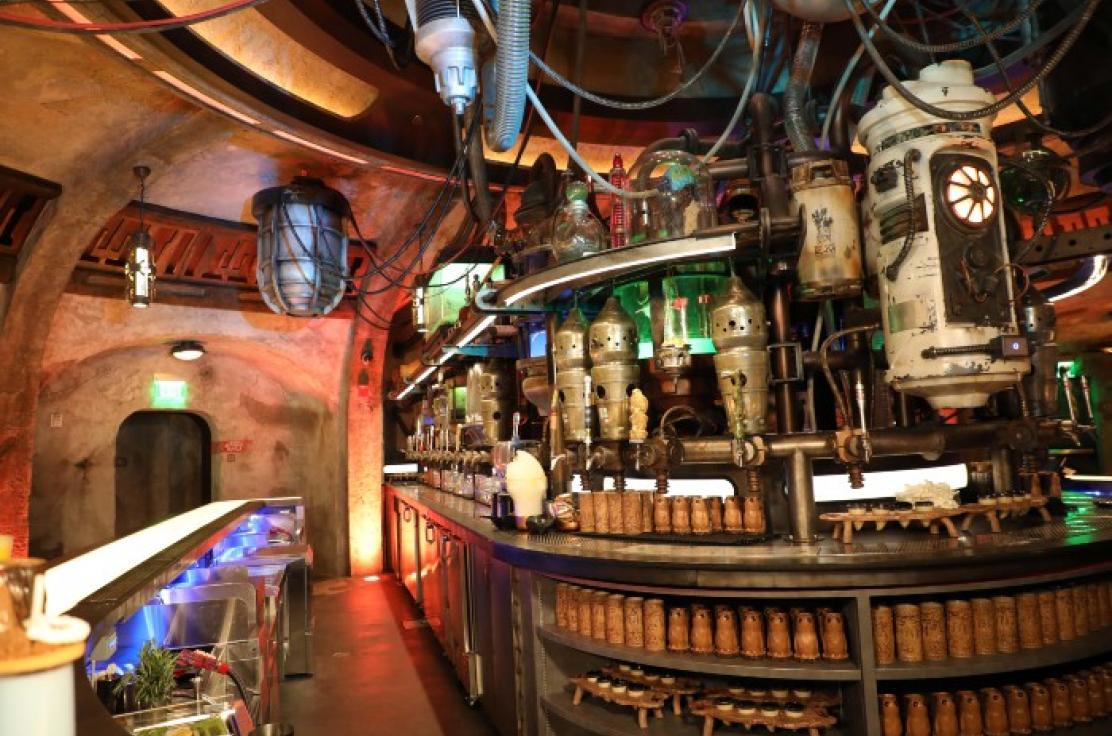 If you get hungry for something sweet and savory, Kat Saka’s Kettle has stellar popcorn! With two flavors to try separately or together, you’ll indulge in a sweet and spicy experience (on Earth, we’d refer to the taste as Fruity Pebbles).

Oga’s Cantina is a must-see location. From the Rancor Beer Flight and Fuzzy Tauntaun, to DJ R-3X (the former Starspeeder 3000 pilot from Star Tours) and Batuu Bits, it’s sure to be on the top of everyone’s list. These exotic beverages are served in unique vessels, some of which can be your very own souvenirs to take back to Earth.

Upon entering the planet of Batuu, you’ll be greeted by many creatures and citizens of this beautiful planet. They all reside at Black Spire Outpost and live under the three suns. When adventuring around, you’ll notice the Batuuans have some odd language. No worries – we’re here to translate so you can be more prepared to converse with them!

‘Til the Spire/May the Spires Keep You = Farewell

Only the Ancients Know = I don’t know

Why You'll Want Your Phone

Besides the obvious of taking tons of photos of Batuu, you can also hack your way through Galaxy’s Edge with Play Disney Parks Mobile App on your phone. You may already use the app for the different queue games throughout Walt Disney World Resort. But here at Galaxy’s Edge, it’s taken a few lightyears forward. Once you have the app, you’ll be able to translate Aurebesh – the written language of Star Wars, hack into droids, scan containers for hidden treasures, and tune into communications happening throughout the land.

You’ll be happy to know that most merchandise in Galaxy’s Edge is exclusive to Black Spire’s Outpost! The merchandise sold here enhances your overall experience throughout the new land.

Looking to become one with the Force? At Savi’s Workshop – Handbuilt Lightsabers, gatherers share their insights into each chosen element of your very own, unique lightsaber. The experience is incredible and left a few travelers in tears of joy (we may have teared up out of sheer excitement...just saying). You can also take home your own droid by constructing your astormech in an interactive experience at Droid Depot. Pieces of your droid can be chosen from a conveyor belt to assemble your own BB-series or R-series. 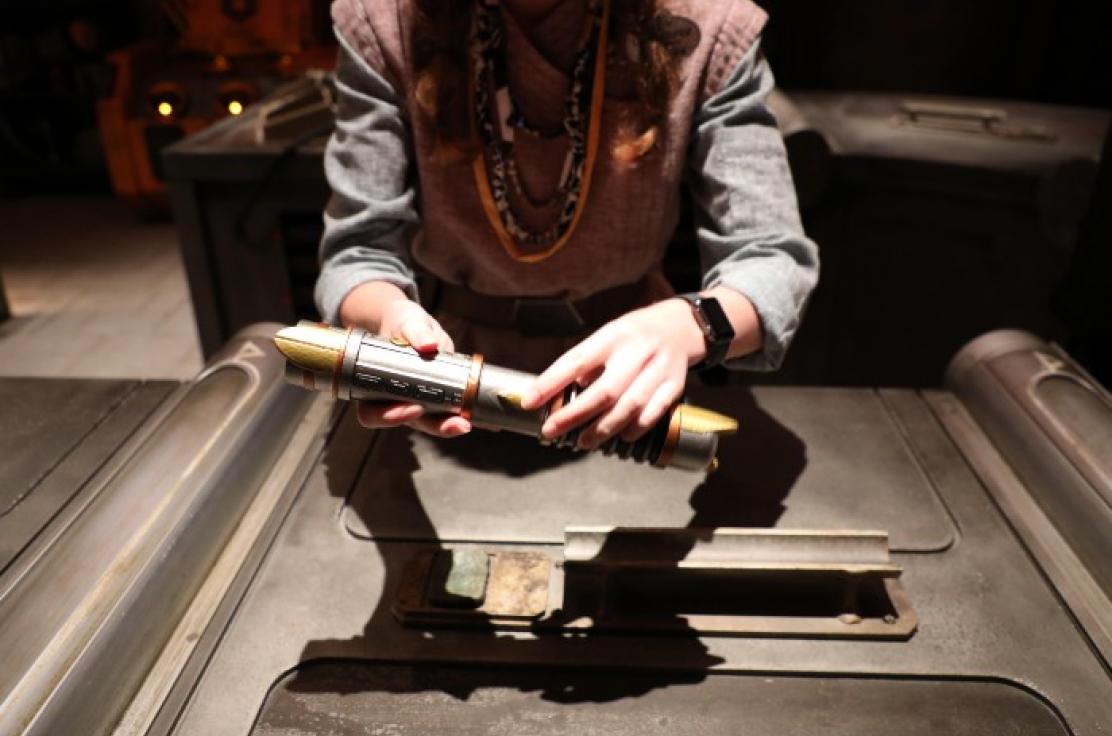 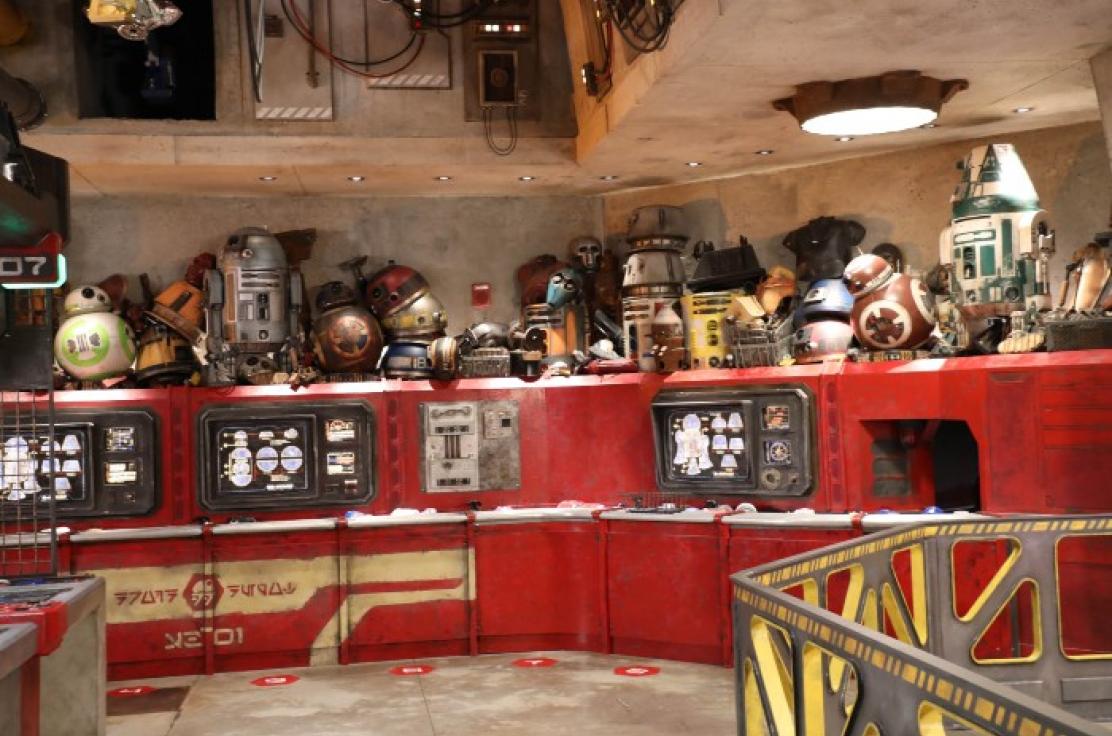 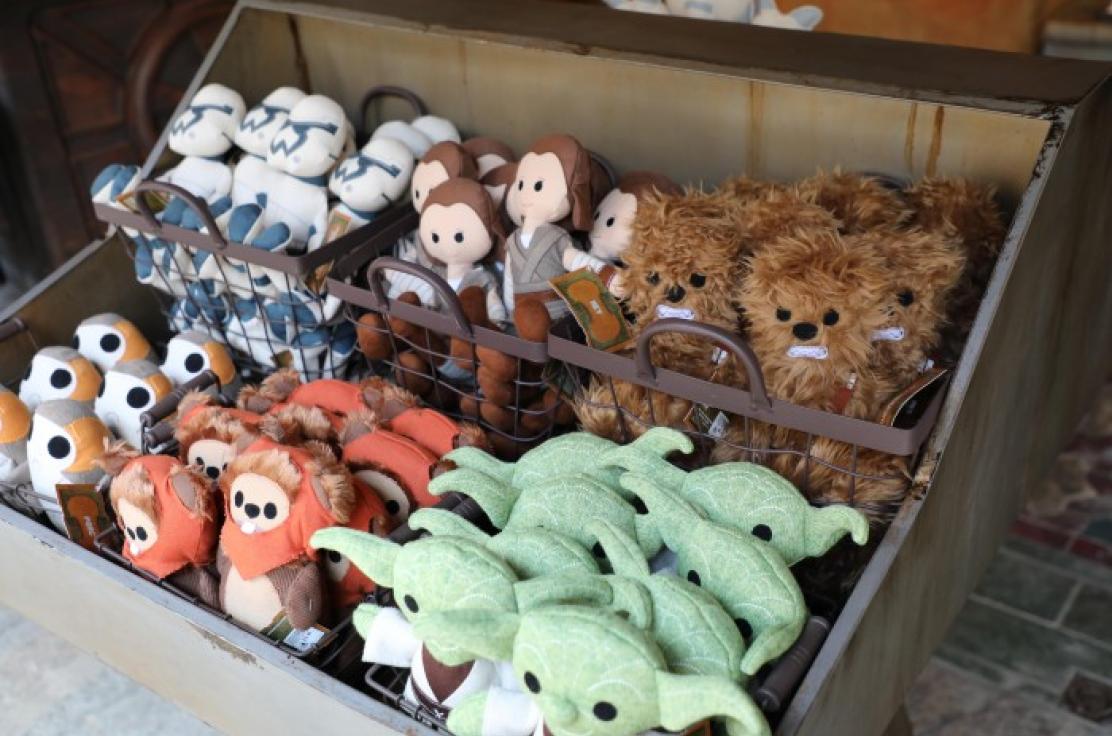 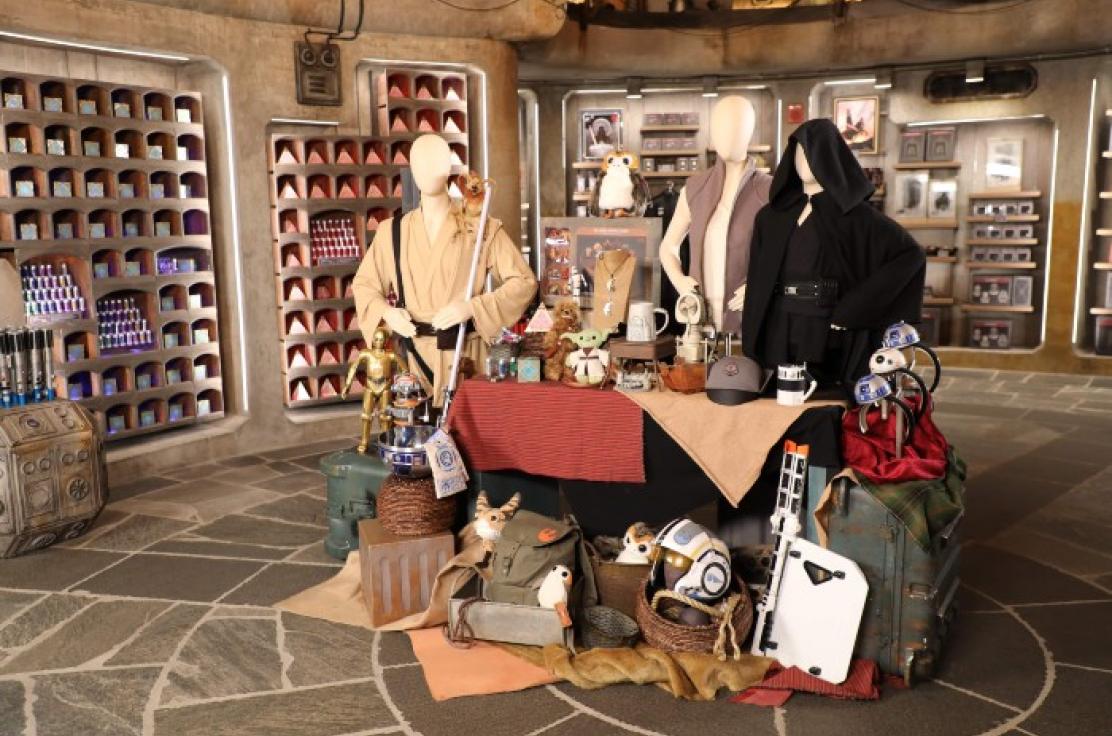 The fun soundtrack inside Oga’s Cantina is a compilation of musicians and composers from around the world. You can even find it on Spotify at Star Wars: Galaxy’s Edge Oga’s Cantina: R3X’s Playlist #1.

With close proximity to Disney’s Hollywood Studios, Kissimmee is the ideal spot fuel up for a day exploring Star Wars: Galaxy’s Edge. Start planning your visit to this sunny destination – and to a galaxy far, far away, by using our Trip Planner tool. Plus, stay up-to-date with all the latest happenings in Kissimmee by signing up for our monthly e-newsletter.

November 18, 2022 by Experience Kissimmee
Want to be on every nice list this year? Then be sure to visit these five must-do activities while visiting this sunny version of a “wintery” wonderland.
Continue Reading

SeaWorld's All-Day Dining plan: Is it worth it?

November 07, 2022 by Experience Kissimmee
Kissimmee is a happening place during the holidays and the merriest of activities are awaiting visitors from near and far.
Continue Reading

8 Reasons to Be Thankful for Kissimmee

October 27, 2022 by Experience Kissimmee
It's a place that brings so much joy to so many people! Discover 8 reasons to be thankful for Kissimmee.
Continue Reading