Three major shopping destinations in one day? No problem.

In Central Florida, everything is over the top, including the shopping venues. Whether it's super-high-end stores or bargain outlets, we've got 'em. And a lot of them. In others words, fashionistas flock to the Kissimmee, Florida, area from around the globe and have a field day. Locals, too. So, if you are headed this way, here's the scoop on my faves, which happen to be within 15 minutes of each other and make for a perfect day of power shopping.

Outlet Mania I began with the Orlando Premium Outlets on Vineland Avenue, one of the most successful outlet centers nationwide. It's really close to Walt Disney World, and it is always my first stop.

They have a slew of stores, some of which were just added in late 2013. Two of the largest are the 28,462-square-foot, two-story Saks Fifth Avenue Off 5th and a 24,048-square-foot Forever 21 store. It's called The Promenade at Orlando Premium Outlets, and it definitely includes a lot of promenading (it's 110,000 square feet, after all).

At Saks, where they happened to be having a major sale, I found a baby blue maxi dress that was originally $121. After all the markdowns, I snagged it for $50. Score! It's perfect for summer, and there's nothing like landing a bargain. There's plenty of good finds for men, too. Plus, nearby you'll find the region's only Tommy Bahama outlet.

I also popped into Barney's New York Warehouse where I almost always find a treasure. Next, The North Face. When I have an adventurous trip coming up, this is where I get kitted out with warm sporty stuff like fleece jackets, wool socks and boots. Oh, and Under Armour, too. 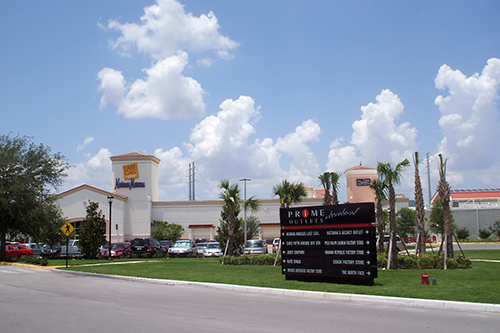 Later on, I visited Banana Republic, BCBG Max Azria, J.Crew and Lululemon Athletica (I found some great running shorts). For shoes, Geox has an amazing selection for men, women and kids. For really good deals, hit Rack Room Shoes, where there is most always a buy-one-get-one-half-off sale.

Alternatively, you could visit the Orlando Premium Outlets on International Drive. They are both owned by Simon Property Group, and have a similar mix of great outlet shops.

Tips: The outlets stay open late (usually until 11 p.m., except on Sundays). I recommend going after the sun goes down. It's cooler and sometimes less crowded. If you go during the day, don't forget the sunscreen. The outlets are open-air malls. 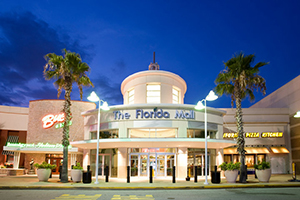 The Florida Mall Once I had my designer duds at a discount, it was time to move on to The Florida Mall. More than 25 million people visit this mall each year. So, needless to say: it's a popular choice. I went to Sephora to search for lip gloss, and ended up getting lip gloss plus a few other essentials. And I had to stop by Zara. Kids will love the Build-A-Bear Workshop and M&M's World store where the chocolate scent wafts through the air. The anchor stores include Dillard's, JCPenney, Macy's, Nordstrom and Sears. On this particular shopping excursion, a tasty wrap from Nature's Table made the perfect lunch to fuel up for the rest of the day.

Note: The mall is currently undergoing renovations, so just keep that in mind.

The Mall at Millenia I ended the day with the most upscale choice: The Mall at Millenia. I went straight to Antropologie, because I had a birthday discount, and I bought a silk blue blouse (with the discount it was $60.) I know, still pretty steep, but it is that cute.

Next, I stopped by the Apple store. I try to avoid going there because it's always so crowded and noisy, but the camera on my iPhone is no longer working. So, it had to be done. (Note: It's best to go during daytime hours during the week because it's a little less crowded. Just a little. And make a reservation, too.)

On to Banana Republic to glance at the sale rack. Then, J. Crew, Bloomingdale's and Splendid. Many super-high-end stores add to the excitement here. You've got Gucci, Chanel, Louis Vuitton. Then, there's newcomer, Prada, whose Mall at Millenia location is one of only 250 Prada-owned retail stores in the world; it was just added recently, along with Versace and Saint Laurent.

To sum it up: The Kissimmee area is a place where you can peruse until your heart's content. And with so many options, you are sure to find a good deal. Check out other great shopping venues in the area as you plan your Kissimmee getaway.

November 18, 2022 by Experience Kissimmee
Want to be on every nice list this year? Then be sure to visit these five must-do activities while visiting this sunny version of a “wintery” wonderland.
Continue Reading

SeaWorld's All-Day Dining plan: Is it worth it?

November 07, 2022 by Experience Kissimmee
Kissimmee is a happening place during the holidays and the merriest of activities are awaiting visitors from near and far.
Continue Reading

8 Reasons to Be Thankful for Kissimmee

October 27, 2022 by Experience Kissimmee
It's a place that brings so much joy to so many people! Discover 8 reasons to be thankful for Kissimmee.
Continue Reading