A Guide to Your First Quidditch Match

Home  >  Blog  >  A Guide to Your First Quidditch Match

A Guide to Your First Quidditch Match

How to play quidditch, avoid looking like a rookie, and impress your friends during the US Quidditch Cup in Kissimmee, Florida

On April 8th and 9th, 60 teams of broomstick-mounted athletes from across America will descend on Kissimmee, Florida, for an action-packed weekend as they compete for the title of 10th US Quidditch Cup champions.

Never heard of a quaffle? Unfamiliar with how to snatch a snitch? Well, why didn’t you say so.

Those who ‘seek’ to know the real-life game of quidditch need look no further. We’ll make sure you’re prepared to speculate on this fast-paced and spectacular spectator sport.

A Brief History of Real-Life Quidditch

Pull up a chair, young quidditch-querying pilgrim. In J.K. Rowling’s wizarding world, Quidditch (capital ‘Q’) has been played for almost a thousand fictional years, but the real-life version of quidditch (small ‘q’) started in 2005 at Middlebury College in Vermont.

Quidditch has no shortage of supporters. In the U.S. alone there are over 4,000 athletes on almost 200 teams in 45 states. There are also teams in Canada, the UK, Australia, Malaysia, China, South Africa, Uganda, the Philippines, and Vietnam, to name a few.

Nowadays, the game is governed by the International Quidditch Association. The last world championship was held in Frankfurt last year. Australia won.

Although from a distance the sport may look like a mindless mob of mounted muggles swatting a volleyball around a soccer field, I can assure you these fine athletes are operating by a sound system of rules and logic.

The wizard Quidditch rulebook spans more than 19 volumes, but the real-life rulebook (in its 9th edition) is some mere 200 pages long. Quidditch is as a mixed gender contact sport that mixes rugby, dodgeball and tag, with some brooms and hoops thrown in. 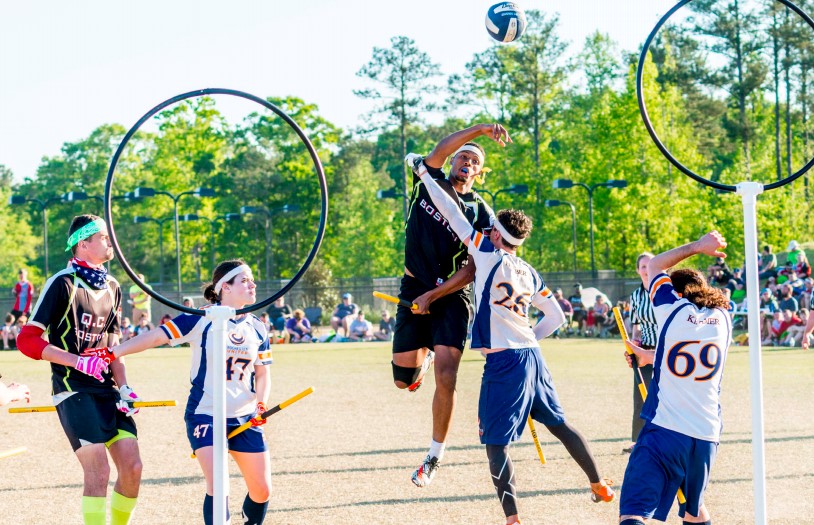 Each quidditch team is made up of seven athletes, with a maximum of four people identifying as the same gender on the field at the same time. Five once the seeker enters the field. This is called the ‘gender maximum’ rule.

Each player wears a headband, indicating their position.

Athletes must play with brooms between their legs at all times. And no, they don’t use Nimbus of Firebolt brooms like in the books. Amateur athletes have been seen using wooden dowels, PVC pipes, or even Swiffers as they jaunt across the field. Players in the US Quidditch events are provided with custom-made yellow brooms, although players can BYOB (bring your own broom).

Each match begins with both teams (excluding the seekers) on opposite ends of an oval field. Four balls—one quaffle and three bludgers—are lined up in the center of the pitch.

When the referee calls, “brooms up!” the players rush to grab the balls before their opponent.

The quaffle can only be handled by a team’s chasers and keepers. Chasers try to throw or kick the quaffle through one of the opposing team’s goals—three hoops mounted on their side of the field, guarded by a keeper.

Every goal scored with the quaffle is worth 10 points. Quaffles can also be used to block bludger attacks.

Bludgers are thrown by beaters to impede players. If hit by a bludger, the wizard player must drop any ball they’re holding, dismount their broom, and touch their team’s goal post before returning to play.

17 minutes into the game, the snitch runner enters the field. The seekers enter at 18 minutes, in pursuit.

The snitch runner is a neutral player dressed in gold who tries to evade the seekers of both teams. Into their shorts a sock-like tail is affixed that holds the snitch—about the size of a tennis ball. To catch the snitch, the seeker must successfully snatch the sock from the snitch runner’s shorts.

Matches usually run 30-40 minutes, but can vary due to the nature of the snitch catch.

The Wizard’s Guide to Kissimmee

While enjoying the tournament weekend, there are several places outside the pitch for the savvy quidditch player’s enjoyment.

For celebrating or bemoaning the caprices of quidditch, there’s pints of Butterbeer or pumpkin juice at the Three Broomsticks in Hogsmeade at Universal’s Islands of Adventure, or more fun to be had down Diagon Alley at Universal Studios Florida.

In search of magical attractions? The Magic Kingdom is an obvious place to start.

Would-be wizards who wish they could fly can get airborne at the Gatorland Orlando zip-line.

And when you’re tired and hungry from a long day of bludger-slinging, Medieval Times Dinner and Tournament is an entertaining stand-in for Hogwarts’s Great Hall.

While fictional Quidditch finals usually take place in remote moors, deserts and deserted islands, luckily the US Quidditch Cup is happening in the much more hospitable arena of Kissimmee.

The official US Quidditch Cup closing party will be held on April 9, 2017 at Splitsville in Disney Springs.

Tickets and more information about the US Quidditch Cup can be found here.

We wish you the best on your magical weekend, and remember: Don’t drop that quaffle!