A wild day of thrill rides in Kissimmee, Florida

The butterflies dancing around my stomach should have been the first clue that the day ahead was going to be a heart-stopper. As we gazed around the sprawling assortment of thrill rides at Fun Spot USA, my nephews and I began to map out our plan for tackling it all. From speeding go-cart races to the dipping and dashing midway rides to the SkyCoaster towering 300 feet above our heads, this mecca of merriment was ours for the taking thanks to the "unlimited armbands" attached to our wrists.

While the pinnacle of the park is the SkyCoaster, the world's biggest such ride, we decided to save that for last. Friends had told us that at night you could see twinkling lights for miles from the top of the SkyCoaster. So we wanted to wait until the sun went down.

For now it was off to the races.

While Fun Spot's go-cart tracks are infamous, most people have no idea why they're so darn good. That credit belongs to John Arie, Sr., founder of Fun Spot and one of the world's most prolific track designers and holders of go-cart track patents. His one-of-a-kind tracks with their multi-level design are unmatched anywhere in the world. But for the average Joe, they're the source of hours of white-knuckled fun and good-humored family rivalry. 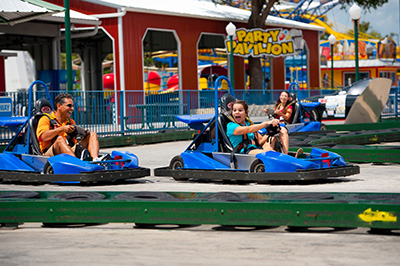 With our helmets on and our speed racers selected, the boys and I slid into the track on the four-story-high Vortex for a ferocious fight for first. With hairpin turns and pedal-to-the-metal speeds, we braved the world's steepest banking curve, a 32-degree arc that rivals Daytona Speedway, which has a banking steepness of 31-degrees. Alas, that curve proved to be my undoing, as I eased up on the gas and mournfully watched my oldest nephew fearlessly race past. He took the prize that round, but we all shared in the glory on the three other exhilarating tracks.

Next we found ourselves in line at the Rockstar Coaster listening to the giddy screams coming from the ride. Unlike typical coasters, the Rockstar allows riders to control how much and how fast the car spins. My companions, fearless thrill seekers with apparently no sensitivity to the ride's spins and drops, made sure to leverage the most out of the ride...which means we were harrowingly thrown into every spin as we zipped high above the park.

Afterward, the boys headed to the arcade while I recovered my equilibrium. We sipped some sodas, devoured some hot dogs and then headed back to tackle the rest of the thrill rides, including the bumper cars, Screamin' Eagles and the Flying Bobs, which took us on a hilarious, laughter-inducing spin.

As the sun began to sink and the night sky was set aglow from Fun Spot's twinkling kaleidoscope of lights, we knew it was time to valiantly challenge the park's most thrilling experience: the SkyCoaster.

Part skydiving, part hang gliding, the Skycoaster costs an extra $20 per person but the promise of the 300-foot flight followed by a 150-foot free fall seemed well worth the price. And we weren't disappointed.

We climbed into the ride and, laying prone, we drifted upward into the sky. "What have we done?" I asked the boys. "We're about to do something awesome!" one replied. In less than a minute we reached the 300-foot summit and while I would have loved a few minutes to enjoy the view, one of the boys pulled the cord and off we flew into the twilight panorama before gracefully returning to earth.

With woops of excitement and wholehearted high fives, we vowed to return another day.

Find more details Fun Spot USA, plus book the perfect accommodations for your vacation to Kissimmee, Florida, in the heart of theme parks and other kid-favorite attractions.

April 21, 2022 by Experience Kissimmee
Explore these top 5 spots in Kissimmee where you can reconnect with nature!
Continue Reading
Receive Exclusive Offers from Kissimmee We promise not to overwhelm your inbox!