I am a lifelong theme park fan. I cherish the memories of spending time at Walt Disney World with my dad, and we were among the first in line for Universal Studios when it opened in 1990. My wife, Jenny, loves theme parks, too, I even proposed to her at Walt Disney World! Later, she surprised me with a visit to Universal Studios for my 30th birthday.

The magic of the theme parks never grows old for us. As our family expanded to include our two sons, Luke and Mason, I couldn't wait to start taking them to Universal Studios, too, but we waited until we thought they'd be old enough to really enjoy it. Luke is now six and Mason is four, so my wife and I agreed that this would be the perfect time to start them on the family tradition. Since this would be their first time, I was hopeful that Universal Studios would spark their own love of theme parks and family fun.

"What are we going to see?" Luke asked me as our family of four passed under the shadow of the massive Pharos Lighthouse near the gate to Islands of Adventure.

"Adventure and magic. We're going to ride a train, too!" I replied with a quirky confidence reserved for dads. I had no idea how quickly I'd find the adventure I was looking for.

"I want to ride the train!" shouted Luke.

"Chugga-chugga, choo-choo!" added Mason with glee. I knew then that we were off to a good start.

As we entered the park, the boys' eyes grew wide at the sights around them. Larger-than-life buildings built of stone led us into the center of the park where we could soak in every detail. The green monstrosity of The Incredible Hulk Coaster® twisted into the sky-the screams of riders echoing across the lake. In the distance, the smooth dome of the Jurassic Park Discovery Center caught my eye and I found myself humming the theme song. Nearby, the dark spires of Hogwarts Castle and the snow-covered rooftops in Hogsmeade stood in contrast with the warm, blue sky of Florida. Were we still in Florida? 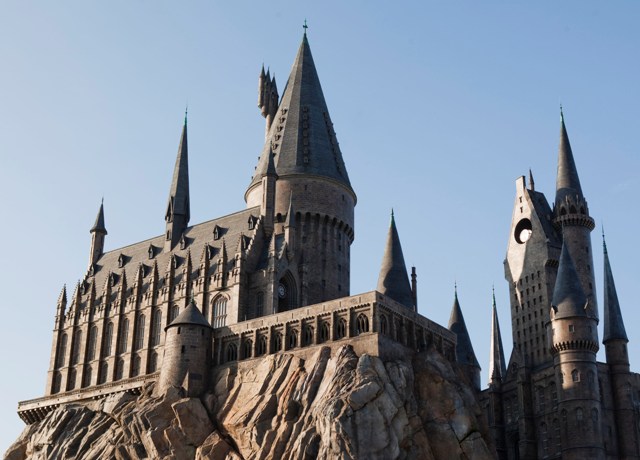 I knew the perfect place to start our exploration - The Wizarding World of Harry PotterTM- HogsmeadeTM.

My boys were excited to peek into every nook and cranny. The level of detail was incredible-with shops selling everything from Chocolate Frogs to the latest school supplies for Hogwarts, robes and all. We stopped at a cart in the center of Hogsmeade and split a frozen ButterbeerTM.

The boys gave me a big thumbs-up as they gulped their frosty treat.

After brief consideration, Jenny and I took them to OllivandersTM, purveyor of fine wands for wizards. The boys love the Harry Potter movies, and I knew that they would love the shop. I was right, and we left with souvenir wands in hand. Mason immediately began waving his wand around and casting spells in his own language, caught up in the magic of the moment.

After spending time exploring the other areas of Islands of Adventure®, Seuss LandingTM featuring Dr. Seuss characters, Jurassic Park and its dinosaur attractions, and Marvel Super Hero Island, home to superheroes like Captain America, Wolverine, and Spider-Man, it was off to Universal Studios Florida, the other theme park at the Universal Orlando Resort, conveniently located right next door.

We'd already seen super heroes, dinosaurs, wizards and more-what else would we find that day?

Universal Studios Florida is a park that celebrates some of the most beloved and celebrated films of all time. Because the boys were young and hadn't seen some of the films that the attractions represented, I wondered if they would enjoy them, but I wanted to give it a shot. I soon learned that a little movie magic goes a long way. 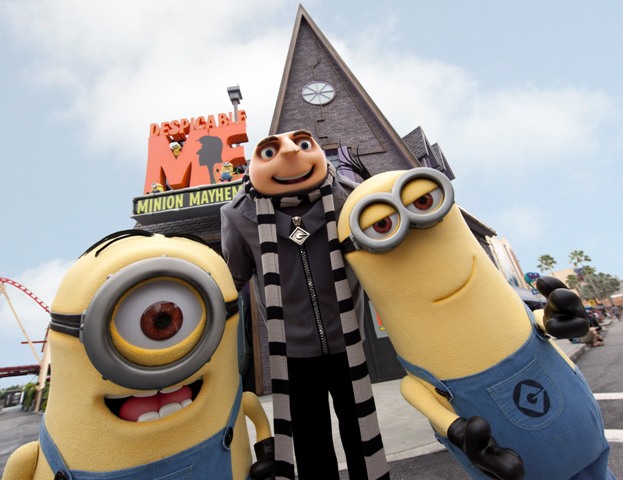 Luke and Mason love the minions from Despicable Me, so we headed over to Despicable Me Minion Mayhem, entering into Gru's living room as Gru himself explained how we would be transformed into minions. Normally, I would be against being turned to a minion, but the boys were jumping up and down with excitement. The boys loved the attraction, watching one of their favorite movies come to life right in front of them. Their grins as we exited were absolutely enormous.

yellow minions to gigantic alien robots, the next attraction had something that made the 80s kid in me very happy: TRANSFORMERS: The Ride-3D. The Autobots and Decepticons were waging an intergalactic war and we humans were in the middle. I couldn't wait to "roll out" with Optimus Prime, Bumblebee and the rest of the Autobots.

The attraction was a blast-literally-as we "rode" an Autobot named Evac through explosions and mayhem caused by the evil Decepticon forces.

The boys looked like grinning bobble-heads as we shook and bounced along our journey. It's a fact that you can never go wrong with gigantic robots. 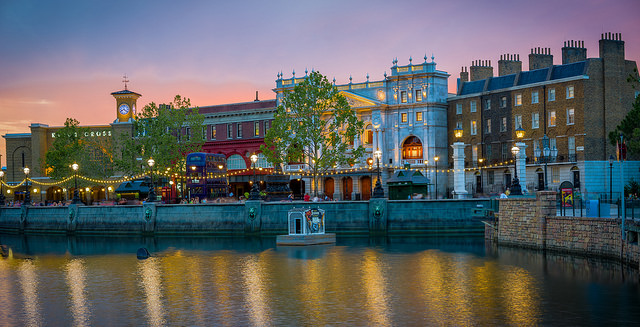 The next attraction looked a lot like London from the outside. But after a little bit of exploration and passing through one iconic brick wall, we found ourselves in middle different part of Harry Potter's world: The Wizarding World of Harry PotterTM-Diagon AlleyTM. Mason immediately had his wand in hand as we began exploring the spectacular shops and eateries within.

Luke left Madam Malkin's Robes for all Occasions with a Ravenclaw robe. I asked him to do a little twirl for his mother while she snapped photos, beaming at him. Mason requested a Golden Snitch from Quality Quidditch Supplies. Both boys are fascinated by Quidditch and were thrilled to have their very own Snitch.

"Dad, do you think we'll play Quidditch when we go to school at Hogwarts? Now we can bring our own Snitch with us!" asked Luke.

"Could be, boys." I smiled at their enthusiasm.

Jenny decided to satisfy her sweet tooth with an ice cream from Florean Fortescue's Ice-Cream Parlour, encouraged by our boys who knew that it's a favorite of Harry, Ron and Hermione. With a range of intriguing wizard-inspired flavors, it was a difficult choice. She finally opted for the strawberry and peanut butter with some encouragement from our two little wizards, who were eager to have a taste themselves! I went for a pint of Wizard's Brew from the Leaky Cauldron. As we continued down the narrow alley, we all looked up and froze. A ball of fire shot from the mouth of a dragon perched atop Gringotts.

Normally, I wouldn't walk towards a fire, but this day was different.

Inside the Harry Potter and the Escape from GringottsTM attraction, we walked by life-like goblins busily working in the bank and before long we were seated in our vault vehicle. The ride had us careening through caverns and underground vaults hidden beneath Gringotts while dodging Voldemort himself.

After exiting Diagon Alley, I decided it was finally time to catch the train at Hogwarts Express-King's Cross StationTM. What looked like an ordinary London train station actually held a great secret-it was the train to Hogwarts. The train was unlike anything we'd ever seen. Through the windows, we watched wizards fly by on broomsticks as we traveled through mountains toward Hogwarts. Beyond the door of our train cab, we heard the voices of Harry, Ron, and Hermione-their shadows cast on the translucent glass. Soon enough, we exited the train and we were back in Hogsmeade, the spires of Hogwarts cresting over the city.

"That was awesome, Dad," Luke said. 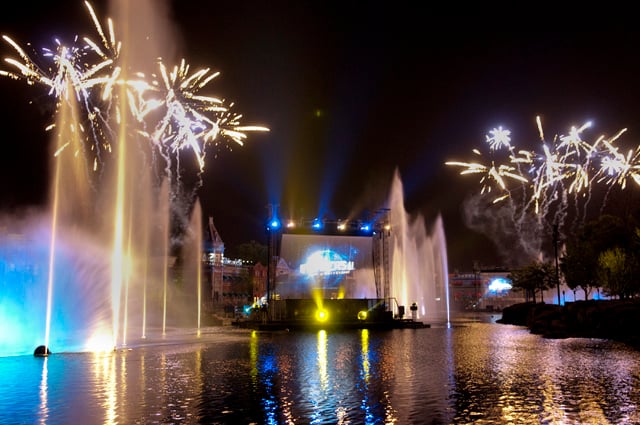 We ended the night with Universal's Cinematic Spectacular, a nighttime show with pyrotechnics, water effects and clips taken from 100 years of classic films. With Jenny by my side and the boys in front of us, the reflections of bursting fireworks within their wide eyes, I felt great about our day.

As the show ended, Luke caught my hand in his. "Dad," he said "I love this place. Can we come back soon?"

In that moment, I realized that the boys already loved theme parks as much as I, and that we would keep building these memories as a family. Universal Studios wasn't just a place for older kids, this was a place for all kids-and kids at heart. We found our adventure-all of us.