The Most Thrilling Theme Park Rides in Kissimmee

Do You Dare? The Most Thrilling Theme Park Rides

Calling all thrillseekers! Kissimmee is home to some of the most electrifying theme park rides and attractions you’ll ever experience. So, if you want to get your heartbeat racing, adrenaline flowing, and defy gravity during your Kissimmee vacation, be sure to take these rides out for a spin (and a twist, and a loop-de-loop)! 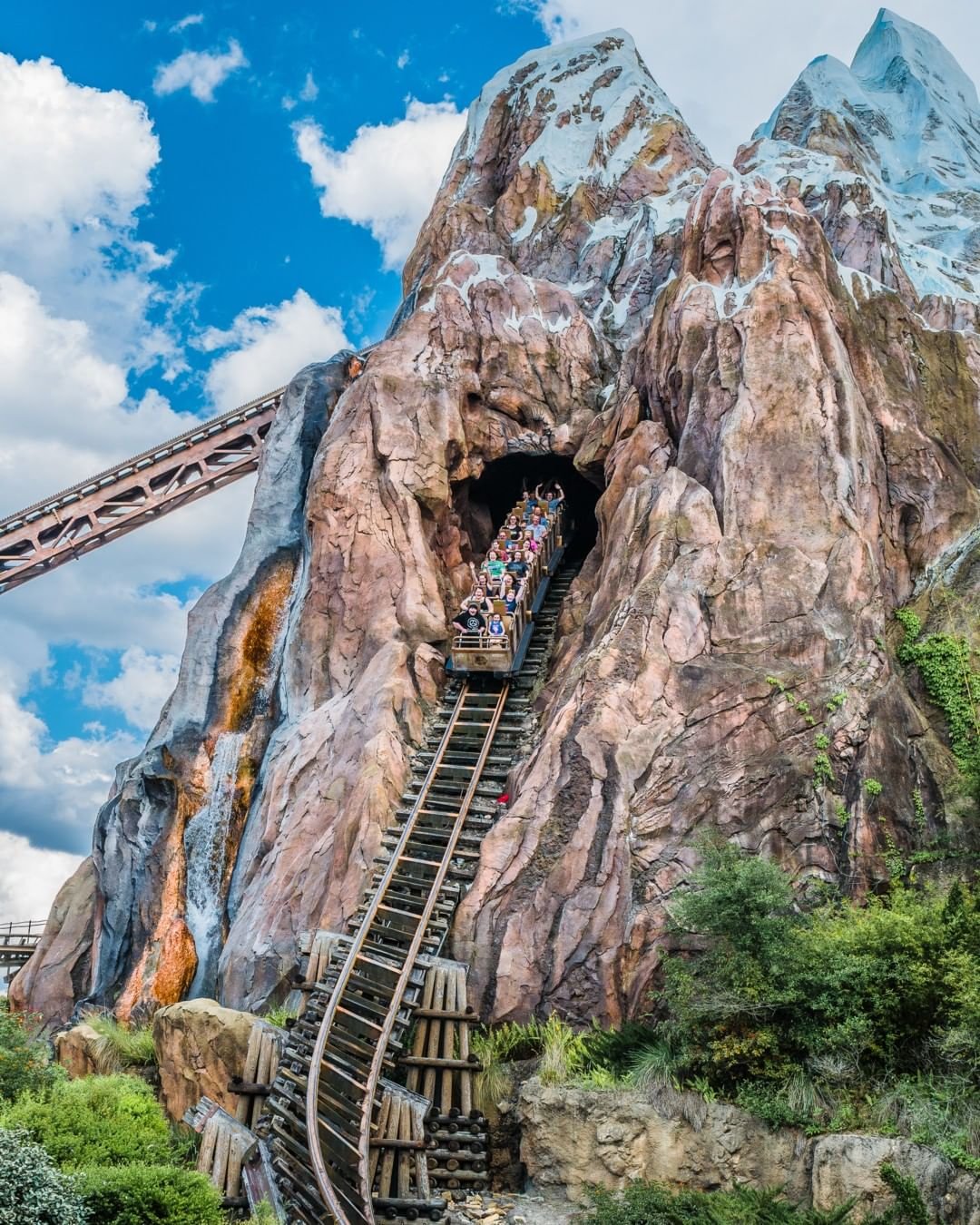 It's a long way down from the peak of Mount Everest! (Photo: @floridasunadventures)

A snow-capped mountain in the middle of Central Florida is certainly an unexpected sight to see, but it’s all part of the thrills (and chills) waiting for you on Expedition Everest – Legend of the Forbidden Mountain® at Disney’s Animal Kingdom® Theme Park. This coaster takes you on a journey up the legendary mountain in search of the elusive Yeti – yet he might not be so interested in being found. In fact, throughout the ride, this furry fella does everything he can to stay a mystery. Featuring big drops, backward descents into darkness, and an abominable ape with attitude, Expedition Everest is near the top of our thrill ride mountain. 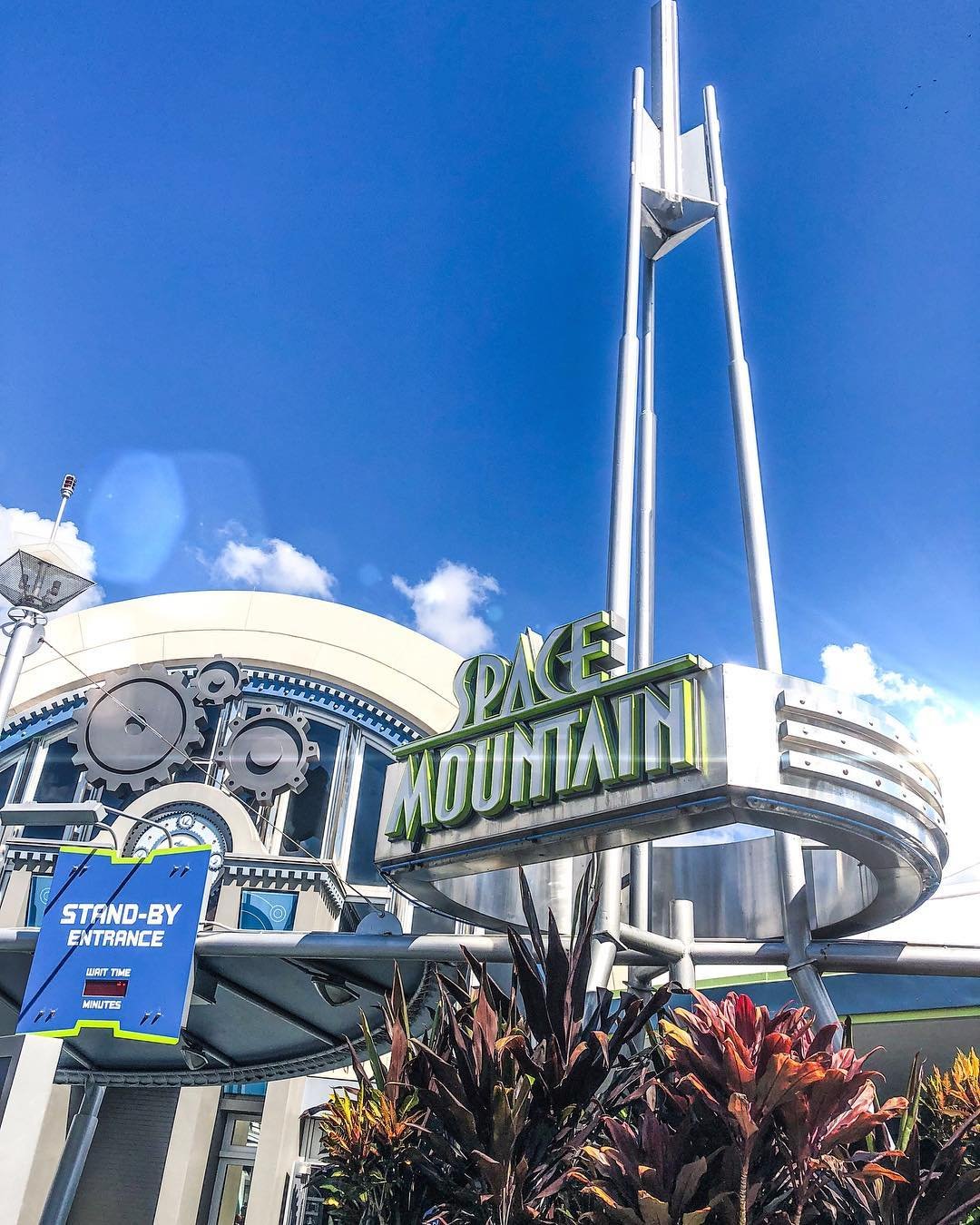 Get ready for a journey that's out of this world. (Photo: @themeparkgroupie)

Space Mountain® is a Walt Disney World® Resort classic for a reason. The oldest thrill ride on our list, Space Mountain has been blasting visitors off into the far reaches of the universe for more than 40 years. It should come as no surprise that this iconic ride is as dark as the night sky (it’s taking you through the galaxy, after all), but it’s not all pitch black. Keep your eyes peeled for shooting stars, fiery meteors, and cool comets as you swirl through space before returning safely to Earth. 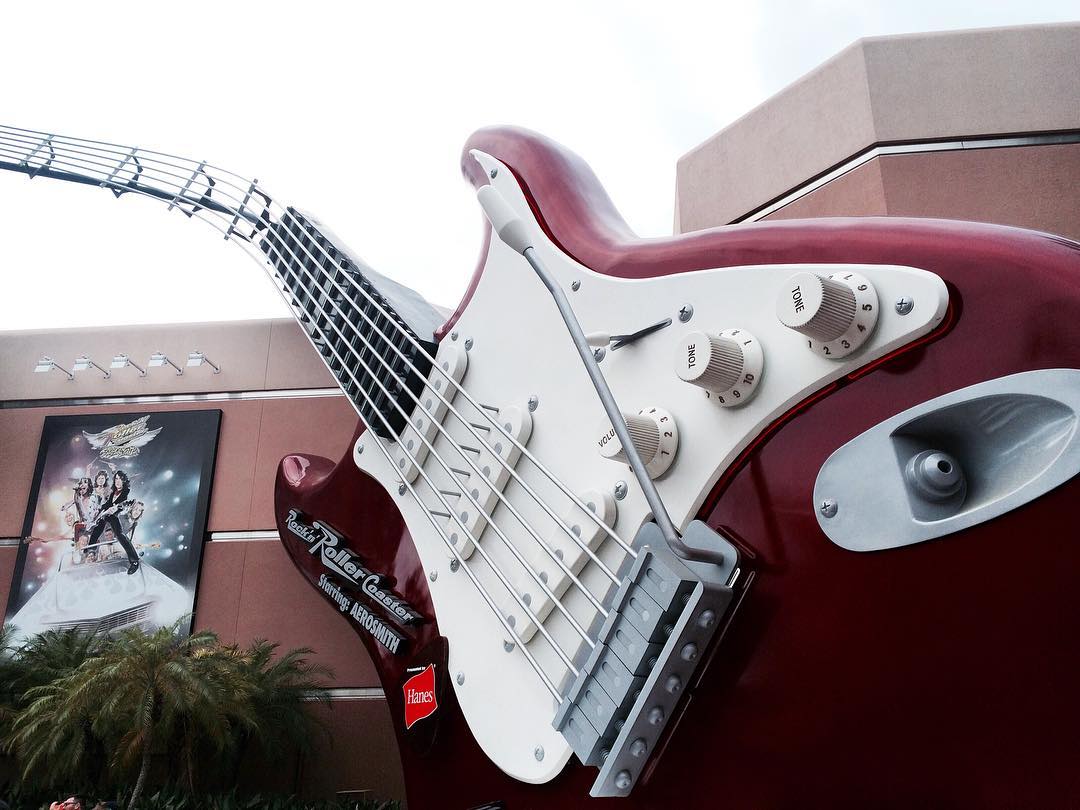 With speeds up to 57 mph, you'll feel the rush of rock and roll on this coaster. (Photo: @nagoh)

Looking for that “sweet emotion” of a feeling like you’re “living on the edge”? Be sure to “walk this way” toward the Rock ’n’ Roller Coaster® Starring Aerosmith at Disney’s Hollywood Studios®. The coaster transports you from the recording studio to backstage at an Aerosmith concert in 75 seconds flat, proving traffic is no match for rock and roll dreams! Within three seconds of this coaster putting the pedal to the metal, it reaches speeds of 57 mph, followed by electrifying sea serpent rolls and an awesome corkscrew that caps off the whole thing. One thing’s for sure, you’ll want to be on a “permanent vacation” after riding this roller coaster. That way you can go back again and again for an encore.

Everyone's favorite Keeper of the Keys is taking you on his all-new adventure. (Photo: Universal Orlando Resort)

Hagrid’s Magical Creatures Motorbike Adventure™ is the latest addition to The Wizarding World of Harry Potter™ at Universal’s Islands of Adventure, and is sure to cast a spell on every thrillseeker in the family. Take control of Hagrid’s motorbike (or take a seat in the sidecar) and prepare yourself for an adventure alongside some familiar faces. This attraction is the longest roller coaster in all of Florida. It features seven launches (the most of any roller coaster in the world), along with an exciting free-fall vertical drop that’s more nerve-wracking than the finals of the Quidditch® World Cup! 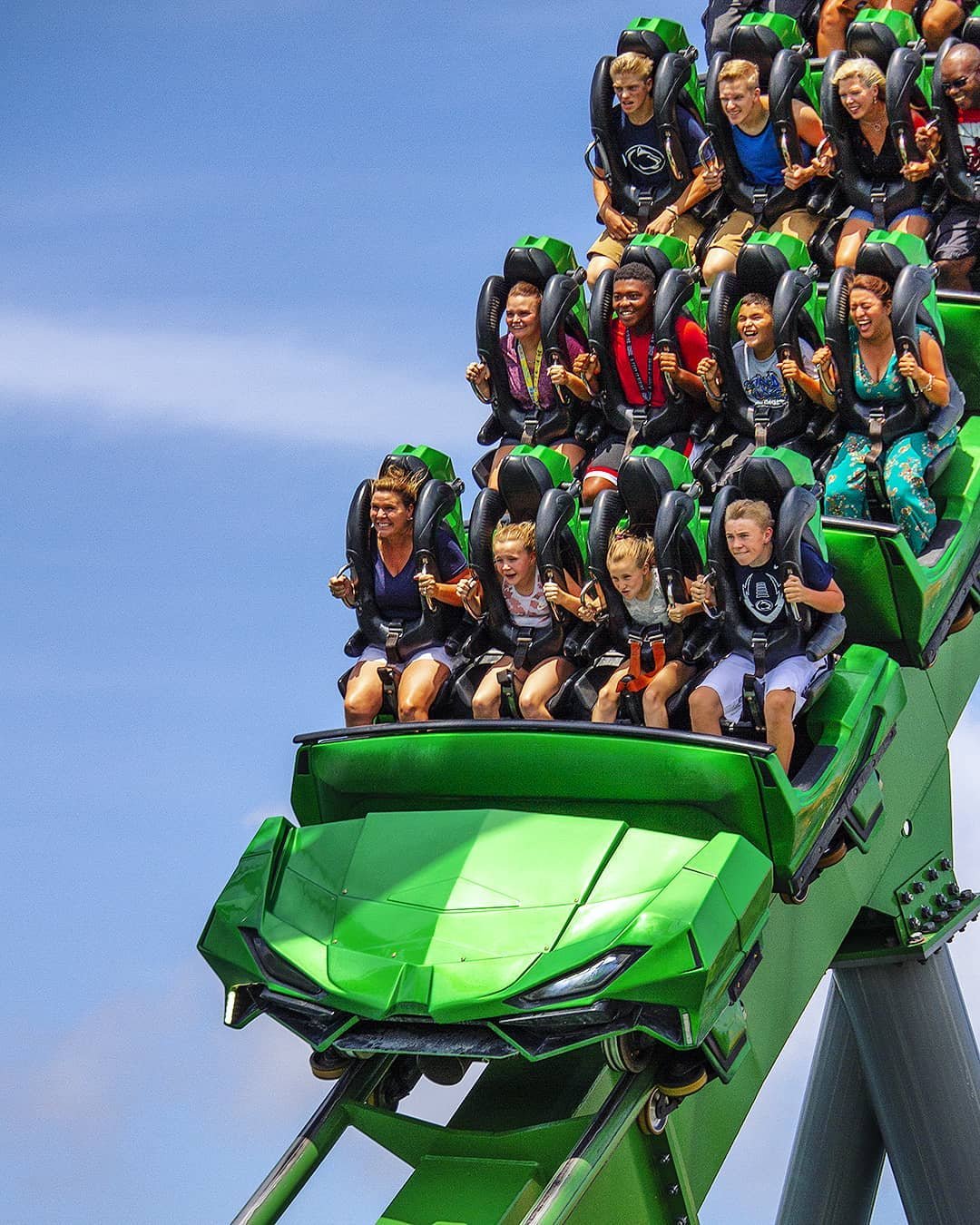 Take a ride with one of Earth's Mightiest Heroes. (Photo: @floridacoasterkings)

Of course, the big green guy known for getting a little worked up when his pulse starts to pound would be the star of one of Central Florida’s biggest, fastest, most thrilling roller coasters. The Incredible Hulk Coaster® at Universal’s Islands of Adventure takes you from zero to 40 mph in two seconds before reaching a top speed of 67 mph. And if the speed isn’t enough to entice, there are also seven inversions, two subterranean trenches, and a 110-foot cobra roll that will leave you wondering which way is up. One ride on this coaster and you won’t be saying, “Hulk smash,” but rather, “Hulk, go again!”

Choose the perfect tunes as you twist and turn. (Photo: @centralfloridathrills)

If you’re ready to rock, you’ve come to the right place! The Hollywood Rip Ride Rockit™ lets you choose your own awesome soundtrack to accompany your thrill ride. From classic rock and disco to pop and country, you’ll have the perfect song to get you pumped up. And trust us, you’re going to want that adrenaline boost when you climb 17 stories in the air at 90° before dropping back down at speeds of 65 mph. The Hollywood Rip Ride Rockit also features the world’s first non-inverting roller coaster loop so you can scream your way through a piece of history. And when the ride is over, don’t forget to get a copy of your very own music video to experience the rush all over again. 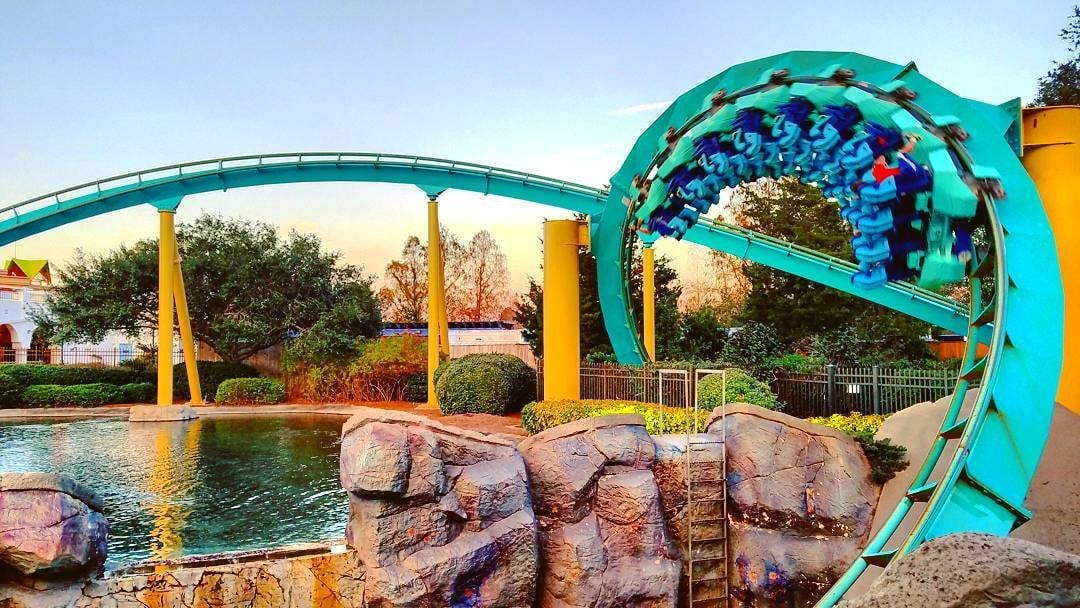 You'll flip for — and on — this thrilling roller coaster. (Photo: @socalcoaster521)

You’re sure to unleash a few screams of excitement when riding Kraken Unleashed® at SeaWorld® Parks & Resorts™ Orlando. The area’s only floorless roller coaster, Kraken Unleashed features a massive 128-foot loop, seven exciting inversions, and top speeds of 65 mph. It’s no wonder they named it after the kraken – a legendary cephalopod-like sea monster released from the sea depths. Fast, floorless, and fun, it’s an absolute beast of a ride!

Think you’re brave enough to ride a roller coaster lying face down? Strap into Manta® at SeaWorld Orlando to find out! On this truly unique coaster, you’ll experience what it feels like to be a manta ray, twisting and turning through the water. Oh, there’s also a head-first, inverted nosedive certain to have pulses pounding. And that’s before the epic finale that we won’t spoil for you. 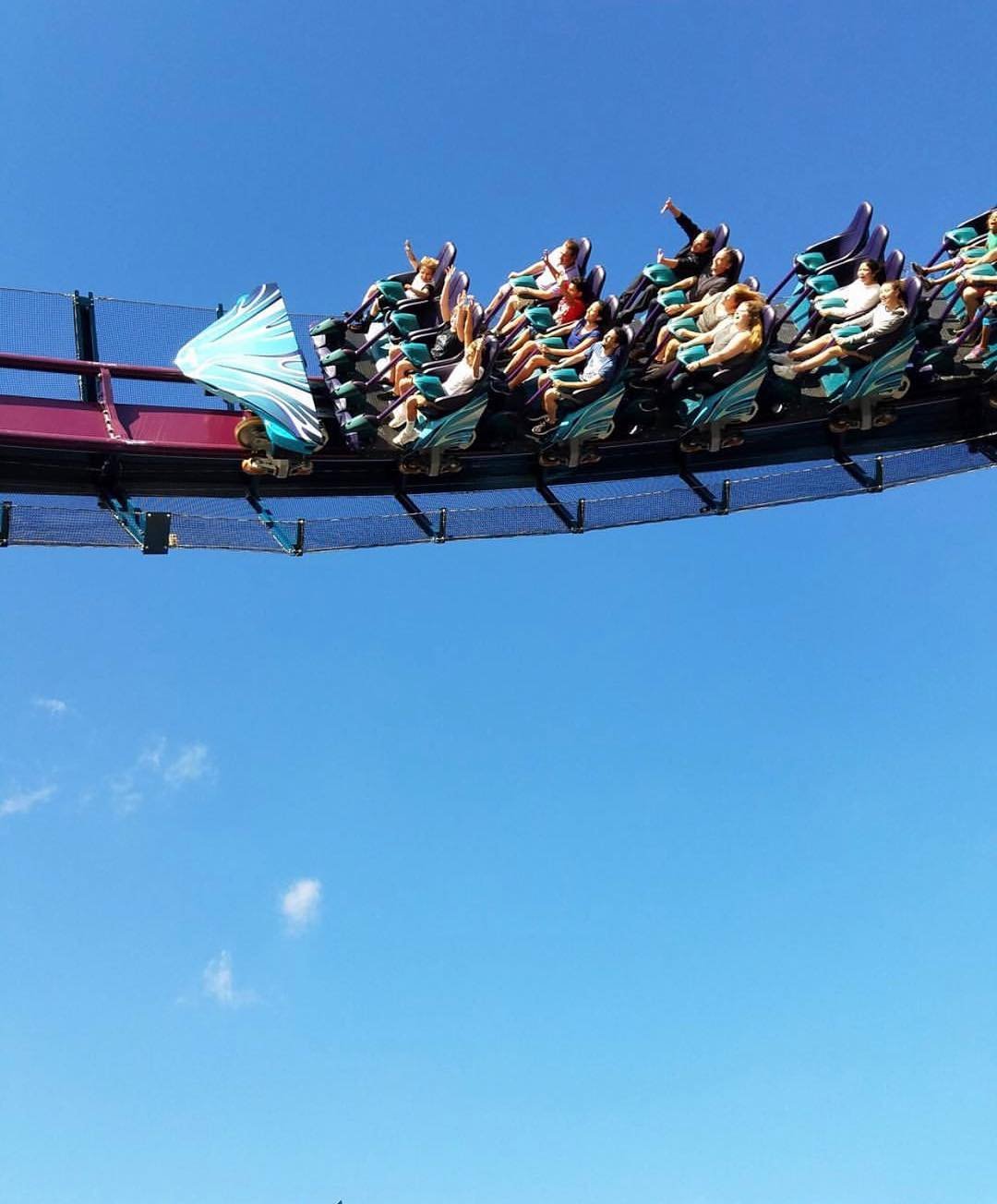 If speed is what you need, this is the coaster for you. (Photo: @southerntideattractions)

SeaWorld Orlando's triple play of high-speed thrills concludes with Central Florida’s tallest and fastest roller coaster: Mako®. Named after the ocean’s fastest shark, Mako reaches speeds up to 73 mph to take you over nine hills (complete with nine moments of airtime) and one unforgettable 20-story dive over ship wreck reef. Along the way, it mimics the movements of the mako shark, twisting and turning its way through the ocean, so you can experience what it feels like to be on the hunt underwater. 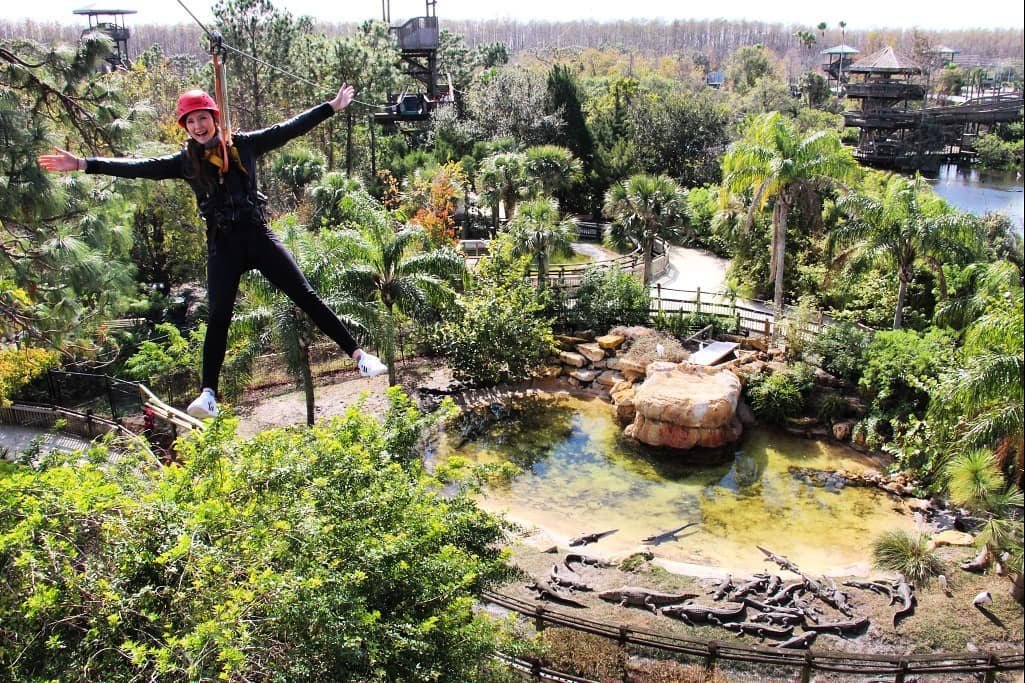 Not a roller coaster, but still a thrill, the Screamin’ Gator Zip Line at Gatorland sends you soaring along 1,200 feet of zip line, culminating with a trip over the Alligator Breeding Marsh – home to 130 giant alligators. If this kind of close encounter doesn’t give you a rush of adrenaline, well, you might just be the bravest thrill rider the world has ever known!

Take the Ride of Your Life

Are you ready for a truly exhilarating vacation? Then Kissimmee is the place to be! Start planning your thrill-seeking trip today. Once you arrive, be sure to share all your rip-roaring ride photos with us on social media using #MyKissimmee. For more on our awesome rides and attractions, subscribe to our newsletter.

January 14, 2021 by Experience Kissimmee
Looking for something new to add to your 2021 bucket list? This quiz offers awesome suggestions to make your year one to remember!
Continue Reading

December 29, 2020 by Experience Kissimmee
Check out what's coming to Kissimmee in 2021!
Continue Reading

December 18, 2020 by Experience Kissimmee
This year, you deserve some Central Florida holiday cheer! So raise a glass and share a toast with specialty drinks from a few local restaurants!
Continue Reading

'Twas the Night Before Christmas in Kissimmee

December 17, 2020 by Experience Kissimmee
What happened the night before Christmas in Kissimmee? Find out!
Continue Reading

Vacation Home for the Holidays

December 10, 2020 by Experience Kissimmee
The holidays are right around the corner, and there's no better place to celebrate than in a Kissimmee vacation home!
Continue Reading

December 07, 2020 by Experience Kissimmee
Kissimmee is a happening place during the holidays and the merriest of activities are awaiting visitors from near and far.
Continue Reading
Receive Exclusive Offers from Kissimmee We promise not to overwhelm your inbox!