Posted by: Experience Kissimmee on November 11, 2016

Celebrating the most famous mouse on his 88th birthday by reminiscing throughout the years.

Mickey Mouse, the iconic mascot of the Walt Disney Company turns 88 years old on November 18, 2016, and what better way to celebrate his life than by sharing fun facts and tidbits about him.

Most probably know that Mickey's first appearance was on "Steamboat Willie" on November 18, 1928, but did you know that his first words were "Hot dogs! Hot dogs!"? In 1929 Mickey made his voice debut on "The Karnival Kid," prior to this Mickey had only whistled, laughed and grunted! Let's see how well you know this famous Mouse, here are some interesting facts about Mickey Mouse. 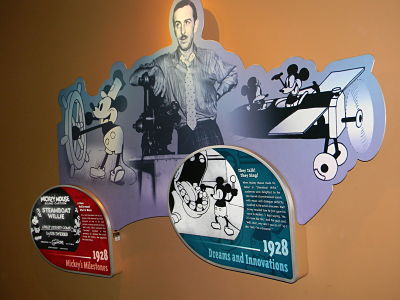 "Mortimer Mouse" was Mickey's original name before Walt's wife convinced him to change it and ultimately he became known as Mickey Mouse.

Mickey first appeared in animated color in the "Parade of the Award Nominees" in 1932. However, this film was never released to the public as it was created for the 5th Academy Awards. His official first color debut was in 1935s' "The Band Concert".

Along all the famous actors at the Hollywood Walk of Fame, Mickey Mouse was the first animated character to get his own star in 1978.

The first Mickey Mouse doll was created in 1930 and it featured Mickey with yellow gloves.

Throughout the years the Walt Disney Company has placed "Easter Eggs" in films and all their parks. On Disneyland's' 50th Anniversary, 50 versions of Mickey ears were hidden throughout the parks. Ever since, you can find hidden Mickeys if you search well enough. These can be partial or complete impressions of Mickey Mouse placed by Walt Disney's "Imagineers" and artists to blend into the designs of Disney attractions, hotels and restaurants amongst others. Mickey made his Macy's Thanksgiving Day Parade debut in 1934 as a 40-foot-tall balloon. He has been the only animated character to ever lead the parade.

Mickey Mouse shared the silver screen with the only animated character who could match up to his popularity in "Who Framed Roger Rabbit?" featuring both Mickey Mouse and Bugs Bunny in 1988, an American fantasy comedy film.

This year Mickey Mouse is celebrating his 88th birthday by traveling around the world and making surprise appearances in iconic locations. You can follow Mickeys' adventure on various social channels such as: Disney Park Blog, Disney's Mickey Mouse Facebook page, and Mickey Mouse Instagram account or you can simply follow him by searching #HappyBirthdayMickey.

If you're visiting Kissimmee, make sure to stop by one of the Disney Stores or Walt Disney World Parks as they will be distributing commemorative "Happy Birthday, Mickey" buttons. Magic Kingdom Park will be celebrating with a special birthday-themed edition of the Move It! Shake It! Dance & Play It! Street Party.